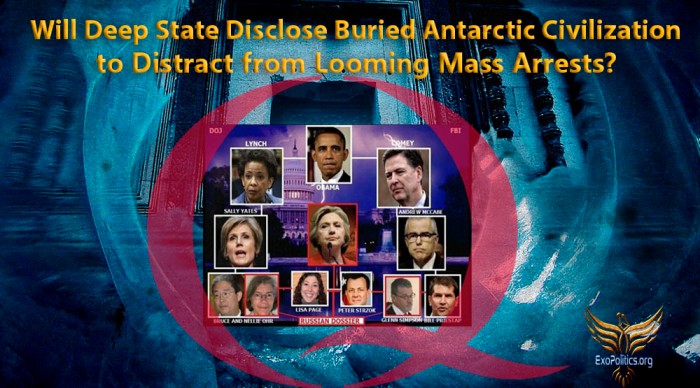 Multiple independent sources have claimed that the Deep State has authorized disclosure of a buried civilization in Antarctica as a means of distracting the mainstream media and general public from looming mass arrests, which will involve charges of subversion, child trafficking and a host of other serious crimes against compromised government officials according to the military intelligence group Q Anon.

A large Octagon shaped structure that is estimated to be 62 acres in size and buried under 50 feet of ice near the Beardsmore Glacier in West Antarctica appears to be the catalyst for such an announcement. Two whistleblowers, a Navy Seal and a US Marine Corps special operator, using the pseudonym Spartan 1 and Spartan 2 have emerged and shared their testimonies with veteran UFO researcher Linda Moulton Howe about the Octagon and the buried technological wonders of Antarctica.

Spartan 1 described entering the Octagon in 2003 to extract a scientist in a video released by Howe on January 23, 2018. Spartan 1’s account of the ancient age and advanced technologies found in the structure, which had multiple layers stretching deep down into the two mile ice sheet was covered in an earlier article.

In the live streaming on February 20, where more of Spartan 1’s testimony was released, he described how a submarine was used to travel from the coastline under the ice sheet to enter the structure at an entry point approximately two miles beneath the ice. This corroborates historic claims that submarines where initially used by Nazi Germany to travel from the Antarctic coast line deep under the ice sheets to establish hidden bases in naturally formed caverns since the early 1940’s.

Howe also released the testimony of Spartan 2 who referred to Antarctica containing “wonders beyond what most can comprehend” with “ties to space and technology beyond belief”. [Timestamp 22:06]

New York Times best-selling author David Wilcock released his own video of Howe’s stunning interview with Spartan 1 and 2, which quickly amassed over 300,000 views by time of writing. After the release of his video, Wilcock was told by his insider sources that an official announcement about the Antarctic discovery had finally been authorized by the Deep State:

Additionally, just since this video went live, we have gotten additional briefings that the Deep State folks are apparently indeed moving forward with the plan to do the Antarctic Atlantis and undersea ruins disclosure in the near future. We heard for some time that they might do this when they are really in trouble, and that time is now.

In early 2017, secret space program insider Corey Goode says he was taken to Antarctica where he got to see first-hand the flash frozen civilization that had been discovered in Antarctica. Goode said that in 2002, scientists and archeologists were allowed to visit the buried artifacts and begin excavations and study the remains. This is consistent with what Spartan 1 later revealed about his August 2003 mission to go and retrieve a government scientist who had been earlier dropped off at the buried Octagon structure to study it.

Goode was the first to claim that the Antarctic ruins and excavations would be revealed in a partial disclosure initiative in order to distract the mass media from looming mass arrests and criminal cases involving Deep State officials:

The Partial Disclosure plan includes … The unveiling of ancient, high-tech ruins in Antarctica that have been newly excavated. This will prove that “Atlantis” was very real, and far more advanced than we thought….

The rapidly-escalating downfall of high-level elite human trafficking rings is bringing these issues to the immediate forefront. The Cabal has run out of time – and they know it.

For many years they have planned on using a partial disclosure to distract and inspire the public if the full nature of their crimes were to become known.

Another researcher with his own independent insider sources about recent discoveries in Antarctica is author Steve Quayle who told radio host, Dave Hodges about what his sources are telling him about an impending announcement, which was also a political deception contrived by the Deep State. Hodges announced in a February 22 video that:

… there is a great deception coming and it has to do with revelation about aliens, but it’s not going to be a real revelation, it’s going to be a fake revelation. There is going to be announced fossilized findings, geological findings that connect Antarctica to Mars… It’s a political purpose, it’s great deception…. I don’t know when they are going to release this. Steve got a heads up that it’s coming from inside sources.

In sum, Wilcock, Goode and Quayle all claim that an announcement about ruins discovered in Antarctica are impending, and that this is related to a political deception of some kind. 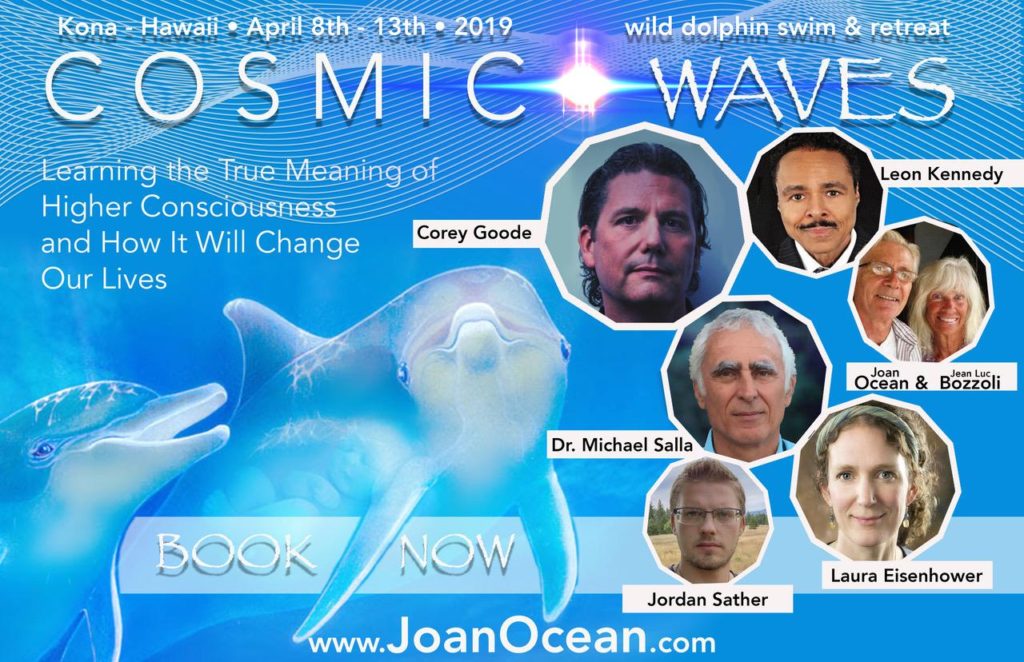 As to the question of why the time appears to have arrived for a political deception involving disclosure of discovered Antarctic ruins, we can turn to Q Anon who has described the great changes that are about to occur.

Q has posted (#2856) that once the Robert Mueller investigation delivers its report of alleged Russian subversion of the 2016 Presidential election, that many long-awaited events will occur:

DO NOT TRUST THE FAKE NEWS MEDIA.
YOU ARE THE MAJORITY.
MUELLER > DECLAS > OIG > TRUTH > JUSTICE
THE GREAT AWAKENING.
YOU ARE THE NEWS NOW.
Q

The Mueller Report is expected to open the door to declassification [DECLAS] of multiple documents including unredacted versions of the FISA applications based on the contrived Steele Dossier which was used to justify surveillance of the Trump Presidential campaign.

This will not only expose Deep State officials involved concocting an “insurance policy” in case Trump won the election, but will also expose the roles of Britain and Australia – not Russia – in subverting the outcome of the 2016 U.S. Presidential election.

Next in Q’s sequence of predicted events is the release of the unedited original version of the June 14, 2018, Office of Inspector General (OIG) report on FBI and Department of Justice (DOJ) actions relating to the 2016 election.

The release of these and other documents will lay out the “Truth” about the Deep State’s effort to subvert the 2016 election, and the criminal actions taken by compromised officials.

This in turn will lead to the final stage in Q’s predicted sequence of events, “Justice”, which will involve the US Attorney for Utah, John Huber, moving forward with the release of up to 60,000 sealed indictments. This is expected to trigger the prosecution of thousands of former officials and Deep State figures involved in a variety of crimes including subversion, human trafficking, and pedophilia in both military and civilian courts.

In a February 18, post (#2803), Q outlined the ramifications of all the information about to be released to the public:

On February 26, as President Trump landed in Vietnam for a summit with North Korea’s Kim Jung Un, Q posted [#2903] that the next 21 days were going to be historic:

It’s going to be HISTORIC!
Planned long ago.
[-21]
Within the next 21 days BIG BIG BIG HAPPENINGS are going to take place.
Q

In conclusion, according to Q Anon, we are on the verge of witnessing the collapse of the Deep State’s efforts to subvert the Trump administration, and the exposure of the criminal actions of many former FBI and DOJ officials in these efforts. In addition, the role of British and Australian Deep State officials in the subversion efforts will only serve to accentuate an anticipated world wide media frenzy over what is about to be revealed. 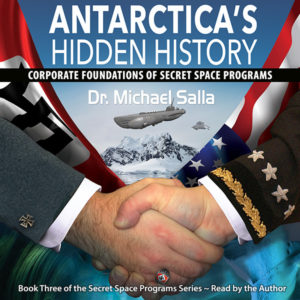 This is an overview of the political context by which we can now better understand why the Deep State has decided to move ahead with disclosure of the discovery of a long-buried civilization in Antarctica. Such announcements will help distract the mass media and the general public from what is about to be revealed in the coming criminal and military trials of former government officials who concocted an “insurance policy” to remove Trump from the Presidency.

The simultaneous public emergence of two military insiders, Spartan 1 and 2, discussing technological wonders discovered in Antarctica, including a 62 acre Octagon shaped structure lying only fifty feet below the ice, raises the possibility that this may be among the first of the ancient artifacts about to be revealed by the Deep State.

While any official announcement concerning discovery of an advanced ancient civilization buried in Antarctica is to be welcomed, it’s always important to be mindful of the political agenda behind such disclosures.

One thought on “Will Deep State Disclose Buried Antarctic Civilization to Distract from Looming Mass Arrests?”