There has been a number of important developments within the U.S. that indicate how ferocious the behind the scenes battle has become between President Donald Trump and senior Deep State officials embedded within the Federal bureaucracy. The most telling struggle involves the April 9, 2018 FBI raid on Trump’s long time personal attorney Michael Cohen, and the Federal Judge appointed to hear Cohen’s case.

It’s worth highlighting that after the early morning raid on Cohen, that same evening, Trump was visited by U.S. military leaders in a powerful show of support emphasizing that they had his back despite his immediate concern over what the raid could mean for the Trump business empire. Significantly, they were photographed with 9 assembled on his right and 11 on his left, in a veiled reference to 911 being a false flag attack known by the military to have been orchestrated by the Deep State. 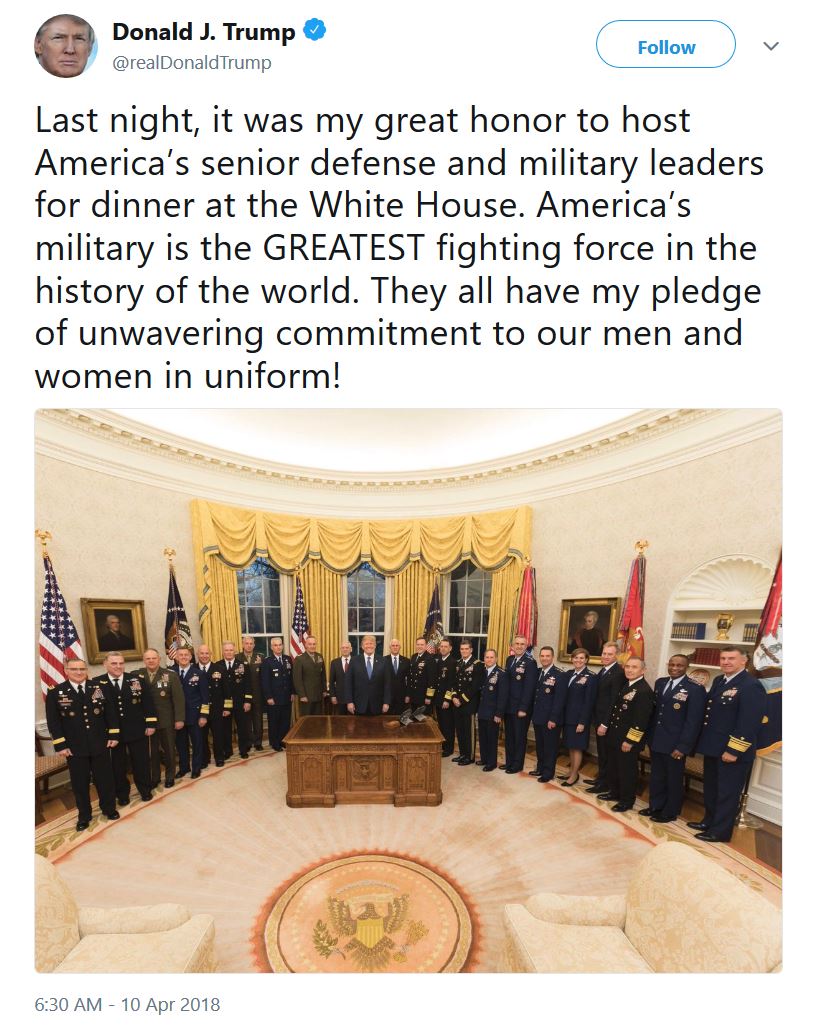 As pointed out in a previous article, QAnon is a group of U.S. military intelligence officials working with the Trump administration to expose the Deep State, and to dismantle its hold over the U.S. political system. In 2015, Trump was recruited by this group of military officials to prevent a coup d’etat , according to best-selling political author Dr Jerome Corsi and others.

It was this group of military intelligence officials that neutralized a number of secret Deep State efforts to stop Trump from being inaugurated after his surprise November 8, 2016 election victory. These efforts have been meticulously detailed in Corsi’s book, Killing the Deep State.

The raid on Trump’s personal attorney marked a dramatic escalation in the Deep State’s efforts to undermine the Trump administration. The raid almost certainly provided the Deep State with damaging material about his business empire that could be used to blackmail Trump despite the support he continues to receive from U.S. military intelligence.

The raid on Cohen occurred less than 24 hours after the April 8 false flag event was orchestrated in Syria, which pinned the blame for a chemical weapons attack on the Assad regime. It’s highly likely that the Deep State demanded that Trump attack Syria to forestall incriminating material being made public and/or his business empire being scrutinized.

Consequently, the limited missile strike on April 14 was carefully planned by Trump and U.S. military intelligence to satisfy Deep State demands, while avoiding any direct confrontation with Russian forces that could precipitate World War III, either in Syria, or later in Iran. Furthermore, President Putin of Russia was made fully aware of Trump’s quandary and chose not to retaliate against U.S. military forces responsible for the missile strike.

According to QAnon, we need to follow the money trail to begin getting answers to these questions. In a November 11, 2017 post, QAnon declared: 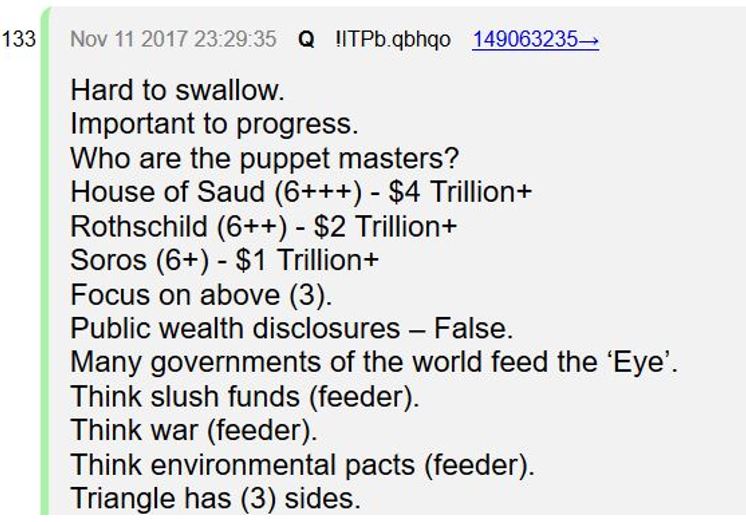 It’s worth beginning with the oldest of this list of puppet masters – the Rothschilds whose influence dates back to their successful financing of the British Empire in the Napoleonic wars. Due to the Rothschild family’s astute judgement in loaning funds to the British and other Monarchical opponents of Napoleon, they became fabulously wealthy after Napoleon’s defeat.

The Rothschilds were also rewarded by their grateful monarchical debtors with national honors and aristocratic titles that quickly elevated key family members into public prominence throughout the 19th century.

QAnon’s estimate of the Rothshild family’s cumulative wealth coincides with the upper range of Investopedia’s estimate of between $350 billion to US$2 trillion, as of March 2016. The lower range of many official estimates are false, according to QAnon, the true net wealth of the Rothschilds is closer to $2 trillion.

Similarly, Investopedia estimates that the House of Saud’s wealth is close to $1.4 trillion, but QAnon is telling us that it is closer to $4 trillion. Given the size of the Saudi Royal family; 15,000 members, with 2000 holding the most power and wealth, the cumulative wealth may in fact be much closer to QAnon’s estimate.

When it comes to George Soros wealth, the official estimate of $24 billion, is once again, much lower than what QAnon is telling us.

As a successful hedge fund manager, however, Soros controls far more than his personal worth, placing the total assets he controls closer to the $1 trillion claimed by QAnon.

So how does the Rothschild family, along with the House of Saud and George Soros, use their enormous accumulated wealth of $7 trillion to pull the financial purse strings of politicians and national elites all over the world?

QAnon provided an answer in a December 7, 2017 post describing how the finances of the Rothschilds, Saudis and Soros are used for complementary world-wide control functions: 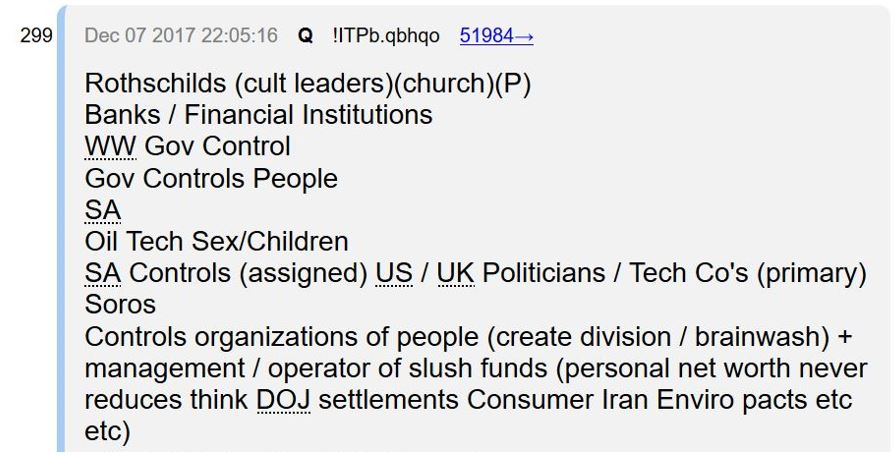 In addition, the Rothschild family has a controlling interest in a vast network of central and private banks, which gives them enormous global influence. Predictably, this financial influence can be used to manipulate politicians all over the planet through campaign contributions. This is the foundation for the Rothshild’s worldwide government control, as QAnon tells us.

What gives credence to QAnon’s reference to the cult and financial power of the Rothschilds is Dr. Bill Deagle, a former physician with U.S. Space Command, who was mysteriously approached by Guy De Rothschild, who claimed to be the “Pindar”, the CEO of Earth Inc.

De Rothschild displayed enormous occult powers according to Deagle, corroborating QAnon’s reference to the Rothschilds as cult leaders. What kind of cult then is he referring to? I will return to this question in Part 2, after examining the functions QAnon ascribes to the other two puppet masters, House of Saud and George Soros.

In his December 7, 2017 post, QAnon referred to Saudia Arabia (SA) as being in control of oil technology, sex trafficking of children, US/UK politicians and major technology companies.

It is not all that surprising that the House of Saud is listed by QAnon as a puppet master, since it has accumulated enormous wealth (officially US$1.4 trillion) due to the oil reserves that it has controlled for decades in Saudi Arabia. Importantly, QAnon is telling us that the House of Saud has used its wealth to secretly control the U.S. and British political systems through campaign contributions and outright bribery.

This is perhaps nowhere better illustrated than in the September 11, 2001 attacks where 16 of the 19 hijackers were Saudi citizens, yet it was Afghanistan rather than Saudi Arabia that was invaded by the U.S. and its NATO allies!

A subsequent 911 Commission Report authorized by the U.S. Congress, which was released in 2002, hid the Saudi involvement by classifying 28 pages. It was only on July 15, 2016 that the Commission’s classified pages were publicly released with details of the Saudi officials involved, which included its then Ambassador to the U.S. Prince Bandar, who funded at least two of the hijackers.

Arguably, it was this release that led to the extraordinary events in Saudi Arabia in early November 2017, where Crown Prince Muhammed bin Salman jailed prominent members of the Royal Family and senior Saudi officials for corruption. Those arrested included Prince Bandar, the most senior of the Saudi officials implicated in the 911 attacks.

It appears that Prince Salman took preemptive action to clear the way for the truth about 911 eventually being made public by jailing and shaming Saudi officials implicated in the false flag attack.

Additionally, QAnon tells us that Saudi Arabia has been long linked to child and sex trafficking. What are the children used for? Aside from the obvious sex and labor abuses, this raises the more troubling practice of child sacrifice. I will return to this when the Rothschild cult leadership issue is discussed in Part 2.

This takes us the third of the puppet masters identified by QAnon.

George Soros is best known for having successfully bet against the British Pound in 1992, and making approximately US$2 billion in the process. If Soros’ cumulative wealth, through his hedgefund is close to $1 trillion, along with secret coordination with the Rothschild and Saudi family, then it becomes easy to understand how Soros could have successfully opposed the Bank of England in his currency speculation.

Soros, according to QAnon, is responsible for manipulating public opinion in directions favored by the Deep State. Through his Open Society Foundation, Soros has been involved in secretly funding dissidents and political opponents that have led to mass movements that have toppled many political regimes.

In addition to his prominent role in toppling Eastern European communist states, Soros’ Open Society played a prominent role in the Arab Spring movement, and more recently in catalyzing mass domestic opposition to the election of Donald Trump.

Slush funds have been created and cleverly used to fund “progressive” organizations that serve Deep State agendas in the U.S. This became clear in July 2017, when the Department of Justice under Jeff Sessions began an investigation of slush funds generated from corporate penalties ordered by judges in Federal lawsuits. These funds were being directed to “progressive organizations” opposed to the Trump administration.

Finally, it’s important to point out that the judge appointed to oversee the case involving Michael Cohen is U.S. District Judge Kimba Wood, who officiated at George Soros’ wedding in 2013. Judge Kimba’s close relationship with Soros clearly points to her being a Deep State asset who has been placed in this important position to  directly threaten the Trump business empire.

Now that the enormous financial assets controlled by the Rothchilds, Saudis, and puppet masters, Soros has been examined, now I can return to QAnon’s claim that the Rothschild are the head of a worldwide cult.