On May 24, my anonymous source, JP, who has provided dozens of photos of different types of craft belonging to a United States Air Force (USAF) secret space program says he encountered a human looking “Nordic” extraterrestrial. He claims the Nordic was wearing a USAF uniform and invited him to go for a ride in a landed saucer-shaped craft in a secluded wooded area of Orlando, Florida.

JP declined the offer but took photos of the spacecraft after it departed (attached below).  His recollection of the conversation with the Nordic reveals that they are directly cooperating with the USAF and abiding by the terms of an agreement concerning their interaction with the general public.

What follows is the Skype conversation I had with JP along with some commentary. I have created a page where earlier articles and videos featuring his photos, along with originals, can be found for independent analysis.

The conversation began at 10:32 Eastern Daylight Time. I have removed grammatical errors and added extra text in square brackets to clarify what JP is saying:

JP: I went Into the Woods. I was hearing a ringing in my ear. I’m thinking it was like a calling. Like I got from the last Contact. I met up with this man. Wearing a United States Air Force suit. Dark blue. His face was different. Possibly a Nordic.

JP: Light blue eyes, blond hair, wearing a United States Air Force Jumpsuit. He was really kind. He said a lot of these craft are going to be seen all over. He invited me to go to the craft. I said no. Yes [he asked] me again if I was sure….

JP: I told him that we’re gonna start needing video evidence. He told me [that] because [of] a deal they have with the United States and other countries, they can’t.

This is consistent with what contactees such as George Adamski, Howard Menger and others have said about human looking extraterrestrials they each helped blend into local communities to evade recognition by the general public, and even national authorities.

It’s worth noting that the current Russian Prime Minister, Dimitry Medvedev, revealed in December 2012 that when he became President, he was given a highly classified file about how Russian and global authorities register and track extraterrestrials secretly living among the human population.

This all suggests that secret agreements have indeed been reached between public authorities and Nordic extraterrestrials, where any kind of video recording of their existence is not allowed by those they contacted.

I return now to my skype conversation with JP where I queried him on his decision not to accept the Nordic offer to go into his craft:

Michael Salla: Surprised you said no. Did you get a bad feeling at any point?

JP: No, I actually felt happiness, but I was kind of mad because of not getting video.

Michael Salla: Hmmm, would you have been allowed to take photos?

JP: He told me. This kind of ship gonna be seen all over. After he talked to me. He touched me. I had a Flash that I was inside the ship. Floating around. It was a split second. Then he told me you’re back.

Here, JP is suggesting that the “Nordic” had arranged for him to view the interior of the craft without physically going inside. Perhaps astral projection or some other kind of non-physical encounter had occurred.

JP then goes on to ask about the cooperation between the Nordics and the USAF:

JP: I ask him what’s going on with you guys and the United States Air Force. He told me that they’re working on a big project together. A couple of projects in the Gulf of Mexico Involving a couple of MacDill Air Force personnel.

Michael Salla: Why was he wearing a US Air Force uniform?

JP: All these sonic booms are part of the project that they’re doing

Michael Salla: Did it have the USAF Special Operations patch?

In earlier incidents, JP has described being taken on board rectangle shaped spacecraft where he saw occupants in USAF uniforms with the patch of Air Force Special Operations. The incidents occurred next to MacDill Air Force Base, home of US Special Operations Command.

JP said the patch worn by the Nordic was different and contained symbols of a star and crescent.

He later explained to me that the uniform itself featured the acronym, USAF, with the acronym also spelled out in a foreign language he did not immediately recognize, but after he did some internet research he found it appeared to be ancient Sumerian. Apparently, this enabled the Nordic to walk undisturbed inside USAF bases:

JP: Another type of space insignia.

Michael Salla: What made you think it was a USAF uniform and not a Nordic uniform?

JP: To camouflage [himself] in the [USAF] base when they’re walking. It [the patch] had United States Air Force.

Michael Salla: Did he tell you he walks around on USAF bases, MacDill?

JP: … Yes, in other bases around the world

Michael Salla: That makes sense. Did he say how long his group has been working with the USAF in joint projects? When did it start?

JP: We never got far in that conversation. I’m thinking a long time Michael. When he left… I ran to my truck.

Michael Salla: Was the conversation done in English or telepathically?

Michael Salla: Were you able to take any photos?

JP said that he was able to take photos of the craft once it took off, but not while it was on the ground. The original photos of the departing craft are located below. The following video contains all the photos he sent, along with zooms of two of the photos.

JP says that while the craft was on the ground, he was about 25 meters from it, but his cell phone didn’t work. He estimated the size of the craft to be about 20 meters in diameter, and it had three window panes which he could see through.

I next asked JP about what the Nordic had told him of the cooperation with the USAF:

Michael Salla: What kind of projects were the Nordics working on with the USAF?

JP: Training how to maneuver the ships. Invasive maneuvers all around United States, in Europe, in  Middle East, Russia, Asia.

Michael Salla: The Nordics were teaching the USAF invasive maneuvers? Can you explain more?

Michael Salla: Were the Nordics sharing technology with the USAF or just know how?

So basically they’re teaching the technology the physics.  When to use the weapons because the weapons sometimes affect the ability of the craft when it’s flying.

The weapon that the craft has is a pulsing weapon energy superheated.  Beams of light Radioactive, how to interact with thunderstorms to conserve and gain energy.

It’s worth pointing out here that based on the testimonies of William Tompkins, Corey Goode and many others, that the US military industrial complex needed to work with German scientists after World War II, to learn about the technology of crashed extraterrestrial spacecraft that had been recovered from Roswell and elsewhere. I discuss this in detail in my latest book, Antarctica’s Hidden History: Corporate Foundations of Secret Space Programs.

Based on JP’s testimony, the USAF in particular is still in need of assistance to understand Nordic extraterrestrial technology, which is more advanced than the recovered spacecraft belonging to small Gray extraterrestrials whose bodies have often been found  inside the crashed vehicles.

It’s worth noting that in previous incidents involving his sightings of USAF aerospace vehicles and Nordic spacecraft, he has been prompted by covert operatives to look in the direction of the craft. This suggests that he is part of a sanctioned disclosure initiative where he is being helped in revealing the existence of an Air Force Secret space program, and their alliance with a human looking group of Nordic extraterrestrials.

I have known JP since 2008 and believe he is accurately revealing events as they have occurred. The photographs provide hard evidence that the incredible events he has witnessed are genuine.

Special Note: A GoFundMe Campaign has been created so JP can attend the upcoming Contact in the Desert Conference in Palm Springs, California so he cans learn from presenters and share his contact experiences. If you appreciate what JP has been doing, please support him by donating to this campaign. 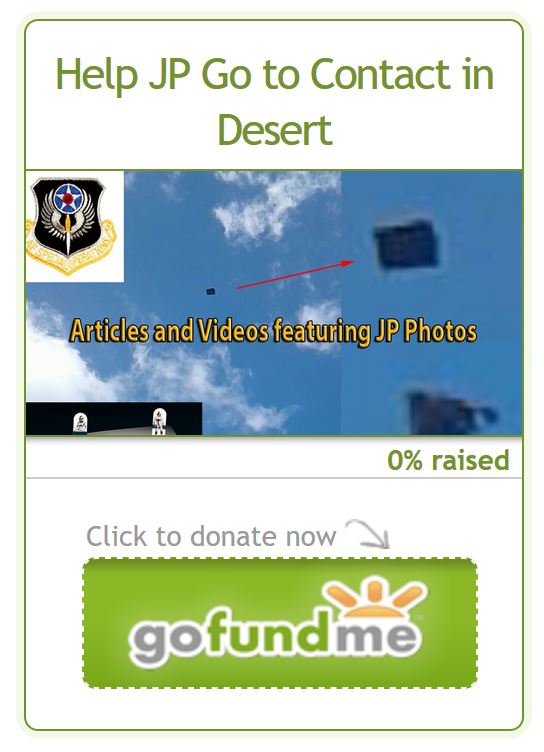 Leave a Reply to The Great Awakening Cancel reply