Antarctica’s Hidden History: Corporate Foundations of Secret Space Programs was simultaneously released in the United States and Europe through Amazon.com on March 25, 2018. The cover illustrated a handshake between a U.S. military official, and a civilian wearing a Nazi ring and an Iron Cross cuff link. The respective flags of the United States and Nazi Germany appeared behind them. The book quickly attained No.1 best seller status in several Amazon book categories and has gained positive reviews.

On May 29, I received an email from Amazon stating: “During our review process, we found that your book’s cover image contains content (i.e. Swastika) that is in violation of our content guidelines for Germany and may infringe German law.” This led to the Kindle edition being immediately withdrawn from Amazon’s German website.

A few hours later, I received a similar email from Createspace, an Amazon subsidiary, informing me that it was also withdrawing the paperback edition from the entire European market. This meant, for example, that potential readers in the United Kingdom could not purchase the paperback edition since the cover MAY violate German law.

I received legal assistance from Duke Brickhouse, J.D., an attorney in Virginia Beach, who worked for several years as a media attorney in Berlin, Germany. He pointed out the following in replies to Amazon and its subsidiary:

The German Code prohibits a swastika’s use where it is used for propaganda.  The code section (1)(3) delineates an exception to this prohibition if it “serves to further civil enlightenment”, “promotes… research or teaching”, “reporting on… historical events”, or “similar purposes”. The book and the use of the swastika on the book’s cover is in fact created for the purpose of civil and historical enlightenment, and not for the promotion of underlying Nazi propaganda intended to further the aims of the Nazi regime.

Amazon stood by its decision despite repeated attempts to have them reconsider on the basis that the book clearly fit the exemptions specified in the German legal code in the use of Nazi era insignia. Put simply, the book is legitimate historical research delineating the respective roles of Nazi and German nationalist groups in setting up a secret colony in Antarctica, and their respective post-World War II activities.

What makes Amazon’s refusal to reconsider its position even more puzzling is that it does include books on its German site which prominently figure Swastikas. Here’s four examples of books which are all currently available on the Amazon Germany website.

All this raises the question of whether Antarctica’s Hidden History was being unfairly targeted; and if so, for what reason?

On February 11, 2018, I wrote an article that Amazon’s founder Jeff Bezos traveled to Patagonia, Argentina on February 3, and along with the then U.S. Secretary of State, Rex Tillerson, allegedly negotiated with the Antarctic based Germans. The talks were held at the Patagonian city of San Carlos de Bariloche, with the purpose of reaching an agreement on future official disclosure of their secret space program.

In a future disclosure scenario, the Antarctic Germans would share their advanced space and healing technologies that would help revolutionize the planet. This would naturally require them revealing their historical evolution and cooperation with Hitler’s Nazi party.

I analyze all of this in Antarctica’s Hidden History, but the core idea is that the German breakaway colony in Antarctica was dominated by the German Navy, secret societies and nationalists, rather than Nazi Party ideologues.

As Nazi Germany’s defenses crumbled before the allied military onslaught, Hitler demanded access to the superweapons that his regime had been promised by the Antarctic colony, which the Nazis had funded and materially supported since its inception.

The Antarctic German colony refused to hand over this advanced technology. Instead they chose a long-term strategy of secret negotiations with the U.S. and its allies from a position of strength, after their fleets of weaponized flying saucers were completed and ready for battle if necessary.

If there is a plan to officially disclose what remains of the German Antarctic Space Program, it would make sense that it would be very eager on disassociating itself historically from Hitler’s Nazi Party, and the atrocities committed in Europe. I believe that Bezos has played a role in forging such a secret agreement, and perhaps this is a factor in Amazon’s problem with the cover of Antarctica’s Hidden History.

Consequently, a new cover was designed for the European edition of the book which is now markedly different to the U.S. edition. The swastikas are gone, and the old German Imperial Flag is included to highlight the Navy and nationalist elements, along with a skull and bones ring depicting the German secret societies, all of which were critical in the evolution of the Antarctic colony. 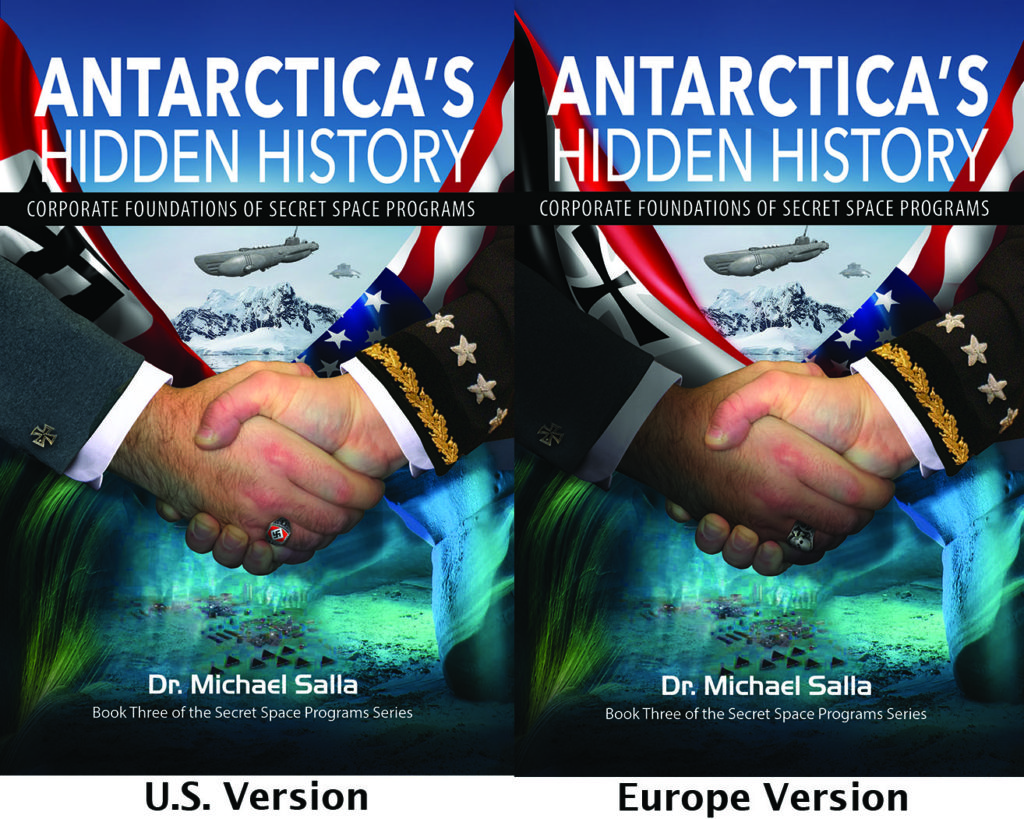 Despite the different covers, the content in the U.S. and European editions of Antarctica’s Hidden History are identical. In it, the reader will learn about the history of Antarctica, and the role played by German nationalists who collaborated with the Nazi regime in establishing a breakaway colony there with advanced aerospace technologies.

Together with massive industrial capital being secretly dispersed around the globe prior to the collapse of Nazi Germany, the foundations were laid for creating a Fourth Reich. This shadowy entity has played an enormous role in secretly influencing global affairs ever since agreements were reached with the U.S. Presidential administration of Dwight D. Eisenhower.

After reviewing the historical evidence, documents and testimonies presented in Antarctica’s Hidden History, the reader can judge for him/herself the historical connection between Hitler’s Nazi Party and the German breakaway Antarctic colony. One thing is clear though, the “Fourth Reich” used Antarctica as a launching pad to establish a nefarious influence over European, U.S. and global institutions, which continues to the present day.