President Trump’s “Make America Great Again” rally in Tampa, Florida on July 31 saw many attendees bearing QAnon shirts and signs, and even had the President approvingly point to someone carrying a QAnon sign. This led to multiple mainstream media (MSM) stories later attacking the QAnon movement. Rather than putting a stop to the rapidly growing movement, the MSM attacks are instead putting QAnon on the radar of millions more Americans.

All this was occurring at the same time as researchers found an important link between QAnon’s tripcodes and lists of books, some of which deal with the topic of “exopolitics” – broadly defined as the political implications of extraterrestrial life. Is this a harbinger that future Q drops will deal with extraterrestrial disclosure and the control groups that have kept all this secret from Americans for decades?

First let’s begin with the Trump rally where QAnon members were prominent in the crowd and Trump approvingly acknowledged them as evidence in a short video featuring Trump pointing directly at someone holding a QAnon sign. 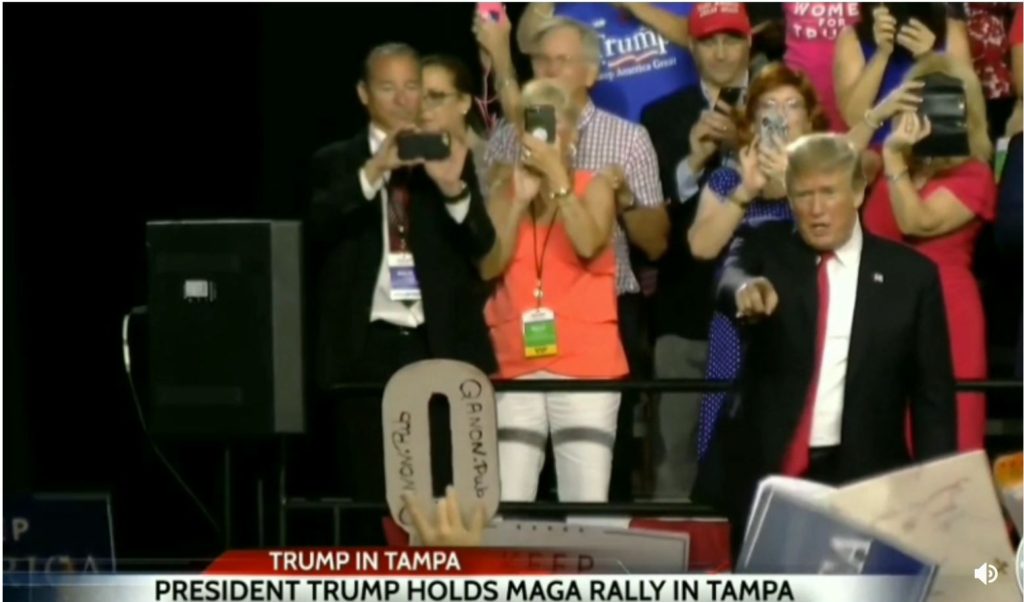 A question about QAnon was even directed to Sarah Huckabee Sanders, the White House Press Spokeperson.

QAnon listed in multiple posts, many of the subsequent MSM article attacking QAnon supporters using terms such as “outlandish”, “fringe conspiracy”, and even “deranged conspiracy cult” as exemplified in his/her August 2 post (#1797): 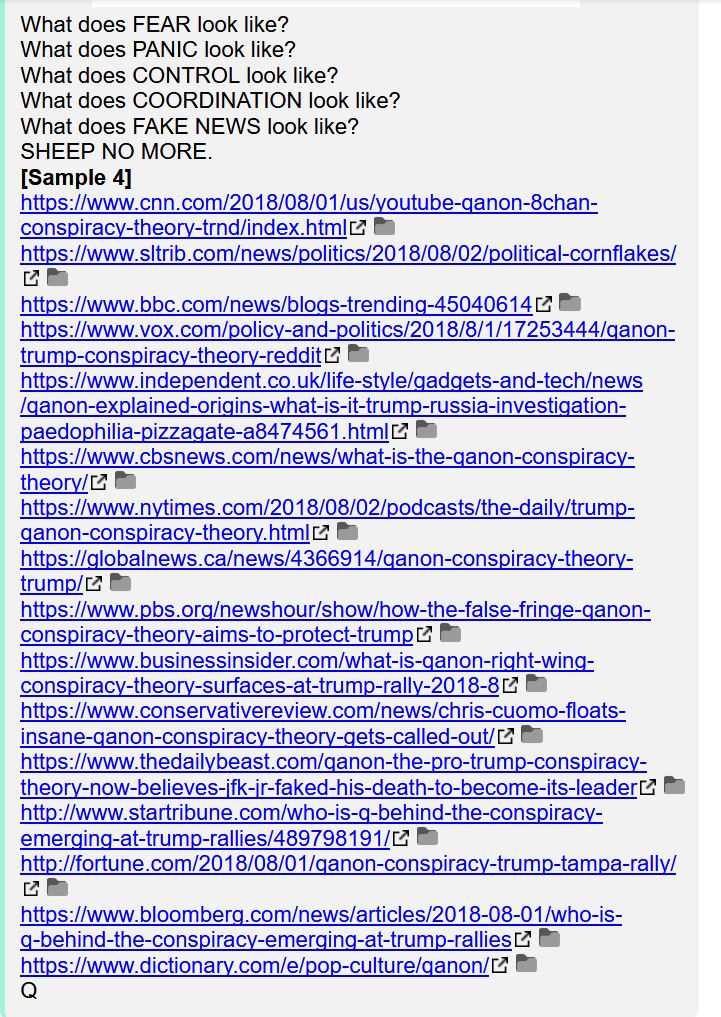 Many of the MSM stories skeptically covered some of QAnon claims such as the Clintons and Democratic Party being secretly dominated by pedophile groups; that George Soros is manipulating domestic U.S. groups to promote political violence; that the Rothschild family is at the apex of a global Satanic network; and of course that the Russia collusion charge was an insurance policy contrived by the Deep State operatives with the help of Britain’s MI6 and other Five Eyes intelligence partners in case Trump won the 2016 election.

The result that emerges from the Trump Tampa rally is that QAnon has now gone mainstream and has reached a critical threshold in terms of many millions of Americans learning about it.

What makes the rapid growth of the QAnon movement significant, despite negative mainstream media coverage, is that QAnon has now gained a mainstream platform for reaching millions of Americans who for the first time will be exposed to intelligence data that is highly classified.

According to several researchers, QAnon has dropped clues about the future direction of the intelligence dumps through the specific tripcodes that have been chosen. Rather than QAnon’s tripcodes being randomly chosen sequences of numbers and letters used for a temporary period for identification purposes on the 4chan and 8chan posting boards, it has been shown that these are references to lists of books on Googlebooks.

The following video posted on July 22 shows how QAnon’s tripcodes have referred to a series of ground breaking books dealing with a range of topics that have been covered in Q posts:

In a later July 29 article titled, “EVERY TripCode & UserID used by Q Points to a Book”, the author writes:

Q has used 11 TripCodes, and 1100 UserID’s. EVERY one of them points to a book when you search them in Google Books. Some are even pointing to specific pages within that book.

Sure enough, when one goes to the Google Books website and enter different tripcodes used by QAnon, one gets a list of books. The writer includes the following examples:

The above books cover a wide range of conspiracy related topics, in particular William Cooper’s Behold a Pale Horse (1991) comes up a staggering 620 times when entering QAnon’s trip codes and ID’s. Behold a Pale Horse is a classic when it comes to the topic of a government/military coverup of extraterrestrial life, which falls under the rubric of “exopolitics”.

In 1989, Cooper became one of the first whistleblowers to come forward to reveal what he had seen in classified U.S. Navy intelligence files when he served on the briefing team for the Commander of the Pacific Fleet. Perhaps most importantly for QAnon readers, he provided some pretty detailed information about the Illuminati (Deep State) and their connection to ruling bloodline families and Satanism.

Of particular interest to me was the tripcode used by QAnon from November 9 to December 15, 2017 (!ITPb.qbhqo) which included my first exopolitics book in page one of the listed books as illustrated below (highlighted by red bar).

On page 3 of the same tripcode, another one of my exopolitics books is listed: Galactic Diplomacy: Getting to Yes with ET. 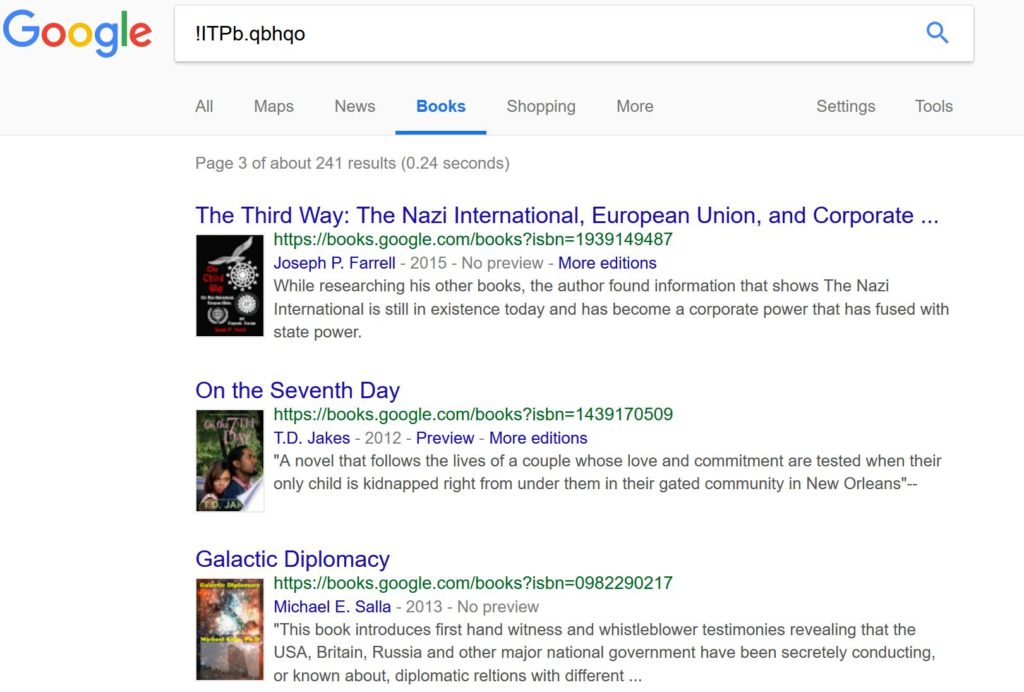 Based on tripcodes, the conclusion that can be reached is that QAnon is signaling that in the future important disclosures about extraterrestrial life are going to be made, and that it behooves people to get up to speed with what the available “exopolitics” literature is telling us.

The Exopolitics and Galactic Diplomacy books were respectively published in 2004 and 2013. I recommend both of these, along with my more recent Secret Space Programs series as critical for any wanting to understand the decades long cover up of extraterrestrial life and technology.

As the QAnon movement grows rapidly with the mainstream media fixation on discrediting Q’s information only serving to rapidly accelerate Q’s popularity, we can get an idea of the direction of future Q drops by the tripcodes and ID’s that have been used, and what shows up on the Google Books listings for these.