On September 19, Q Anon dropped two bombshell posts affirming the existence of secret space programs and extraterrestrial life. The two posts open a big door for the millions who have been following the Q information, to learn about secret space programs and extraterrestrial life, and how these have been hidden from the general public.

In the first post, Q responds to questions about whether extraterrestrial life exists and whether the Roswell UFO crash really happened, and replies as follows: 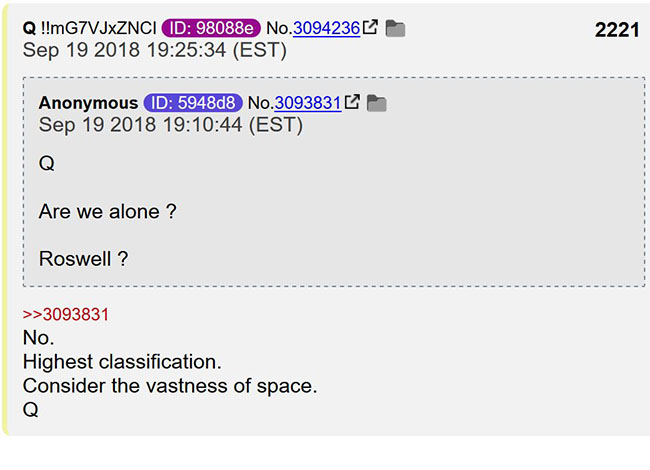 Q’s response makes clear that we are not alone and that the truth about the Roswell flying saucer crash has the “highest classification”.  The response is significant since it affirms what a senior official with the Canadian Government’s Department of Communications reported back in 1950 when he inquired about the Roswell crash among senior U.S. government scientists.

Wilbert Smith’s official report was eventually released through the Freedom of Information Act:

The matter is the most highly classified subject in the United States government, rating higher even than the H-bomb.

Perhaps anticipating skepticism, Q further advocates that readers consider the vastness of space to realize that our galaxy, and the universe more generally, is certain to be teeming with life, some of which have technologically evolved sufficiently to travel through our galaxy and visit the Earth as occurred with the Roswell incident.

In the second bombshell post from September 19, Q responded to a number of questions about secret space programs, and replied: 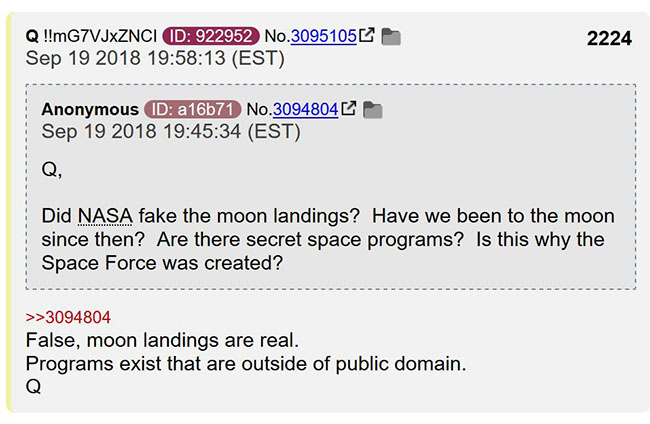 In stating that the “moon landings are real” Q is refuting conspiracy theories that the moon landings were hoaxed. This removes an impediment to the general public learning the truth about what has been really happening on the moon subsequent to the Apollo moon landings.

In the next statement, Q affirms the existence of space programs that “are outside of public domain”. This means that Q wants readers to understand that the information on these non-public domain” space programs is highly classified and restricted to those with need to know access.

Furthermore, Q is alerting readers to the fact that much information about these secret space programs is found in the private corporate domain, and not necessarily in the hands of the US government and the military services.

Two insiders, Emery Smith and Corey Goode have recently spoken about how corporations are in charge of secret space related programs run out of military installations such as Kirtland Air Force Base. In the book, Antarctica’s Hidden History and the Corporate Foundations of Secret Space Program, the historical genesis of corporate control over space programs is described in detail.

While Q did not explicitly refer to President Donald Trump’s Space Force initiative, it can be inferred from Q’s reply that this is related to the existence of secret space programs.

In can be expected that Q will reveal much more as the general public becomes open to the possibility that the truth about secret space programs and extraterrestrial life has been hidden, and the Space Force initiative becomes a means of wresting control away from corporations and back into Presidential Executive control.