Alien Disclosure is a science fiction book based on a real-life event involving President Dwight Eisenhower meeting with an extraterrestrial delegation in February 1954. The author, Allan Kules, weaves a fascinating story of how a UFO researcher gets his hands on a copy of the film taken of the meeting, evades a secret government effort to capture him, and eventually takes it to the United Nations where it is played thereby disclosing the truth to the world. 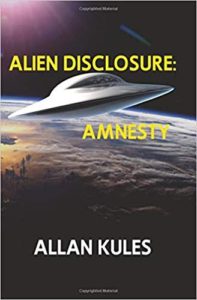 The book’s plot provides an intriguing example of how full disclosure can be triggered by a positive faction of the secret government providing UFO/exopolitics researchers with leaked documents of real events. This first time this happened occurred in the 1980’s and 1990’s with the leaked Majestic Documents, and could easily happen again with a Wikileaks type release of UFO/extraterrestrial related documents.

In Alien Disclosure, a positive secret government faction arranges for the Eisenhower film to be given to the hero, James Broadhurst, and this group helps him to evade a negative faction. He was chosen because of his firm belief that amnesty would need to be given to all those involved in maintaining the secrecy system.

While on the run, Broadhurst gets to meet with human looking extraterrestrials that have infiltrated Earth society, who are also behind the full disclosure initiative. He also gets to witness some of the advanced technologies used by the secret government such as teleportation, and is taken for a ride on an extraterrestrial spacecraft.

What I found especially helpful was the way the negative secret government faction was depicted. The villains were not dehumanized as psychopaths on a rampage of destruction as they carried out illegal orders, but as typical government agents with a highly skewed national security belief system that made them view extraterrestrial disclosure as a genuine threat for human society.

This made it easier to understand why amnesty, based on the Truth and Reconciliation model used by countries such as South Africa, could be used in a full disclosure scenario. Amnesty is going to be a controversial topic as the full enormity of what has been kept secret, and how the secrecy system has been ruthlessly enforced for over seven decades is eventually disclosed.

Kules’ book presents the pros and cons of an amnesty policy when it comes to full disclosure, and why amnesty is critical in getting the negative secret government faction to stand down. In our world today, there is little doubt that the advanced technologies possessed by the secret government could cause enormous destruction if unleashed by those backed into a corner with no other option.

Yet, as we are seeing with the QAnon movement, there are over 50,000 sealed indictments that have been issued against Deep State officials. The threat of being subjected to a military trial makes for a big motivator in getting cooperation from them. If QAnon is to be believed, the Deep State is on the verge of collapse, so why would blanket amnesty be necessary for the perpetrators of crimes stretching back decades?

Would a “restorative justice” model based on Truth and Reconciliation be better than a “punitive justice” model in dealing with the complex legal and political issues raised by full disclosure? There are pros and cons with both models.

In the case of the Truth and Reconciliation model used in South Africa, many felt that the truths revealed in the process helped bring closure to the victims and/or their families, while others believed that the perpetrators of atrocious crimes were treated far too leniently, and literally got away with murder.

In the case of the Nuremburg War Crimes, while a few senior Nazi officials were punished, the vast majority escaped punishment since evidence was systematically destroyed, and/or such officials went underground to escape justice.

I believe the answer lies in finding some balance between these two justice models since those responsible for the most egregious crimes should be exposed and punished as occurred at Nuremberg. Yet, it’s clear that in the vast majority of cases, where evidence is lacking, a Truth and Reconciliation process has clear advantages. Furthermore, we the victims of such crimes need to move on into a post-disclosure world and forgiveness appears to be an important rite of passage into what lies ahead.

Kules’ book offers many insights into how the full disclosure process might play out, and how the world will react to the truth about extraterrestrial visitors, release of advanced technologies, and the exposure of those who brutally enforced the secrecy system.

Alien Agenda is a very entertaining read, with lots of fascinating plot turns, and inspires the imagination to think about how full disclosure will happen – something that is vital to how it all eventually unfolds.

On a personal level, I was gratified to see how my own research on the 1954 Eisenhower extraterrestrial meeting inspired Kules to write his book. The meeting was a formative event in world history that has been largely ignored by UFO researchers. The multiple diplomatic meetings Eisenhower had with alien ambassadors throughout his administration has shaped the nature of U.S. and world politics ever since.

One area that Kules’ book didn’t cover, is the existence of a German Secret Space Program operating out of Antarctica, which has morphed over the decades with corporate assistance into something quite sinister that operates in parallel with alien contact. Perhaps this is something he will cover later in his Alien Disclosure Trilogy.

I highly recommend Alien Disclosure: Amnesty as a book well worth reading. It is available on Amazon as a paperback and would make an ideal gift for those interested in science fiction, and have an open mind to the truth about extraterrestrial visitation.