In the newly released December edition of the MUFON Journal, the first detailed analysis of a leaked 47 page Defense Intelligence Agency (DIA) document is published, offering the startling conclusion that it is authentic. The DIA document provides a broad overview of the official history of extraterrestrial contact with Earth, and credits the beginning of the modern UFO era with the Colorado Springs radio transmissions of Nikola Tesla, which led to extraterrestrials sending interstellar craft to investigate. This culminated in flying saucer crash incidents such as Roswell (1947) and Aztec (1948), and the establishment of formal diplomatic relations with a human looking group of extraterrestrials during the Eisenhower administration.

The MUFON Journal article’s author, Dr. Robert Wood, is the world’s foremost authenticator when it comes to the controversial Majestic Documents. These are leaked documents concerning the activities of Operation Majestic 12, which was formally set up in September 1947 to manage the UFO/extraterrestrial issue. A former aerospace engineer with McDonnell Douglas whose career spanned 43 years, Dr. Wood began his investigation and authentication of the Majestic Documents in 1995 with his son, Ryan.

In his article, which is titled “Forty-Seven Pages From the DIA: Why Should We Care?”, Dr. Wood gives a succinct overview of the 47 pages of the leaked DIA document:

Basically, there are five parts of intellectual content: (1) objective, history and organization of MJ-12; (2) details of the 1947 Roswell crash recovery; (3) details of the 1948 Aztec crash recovery; (4) condensed conversations with the Aztec EBE; and (5) issue of the national security or the risk of cultural upheaval, together with diplomatic and cultural exchanges during the 70s and 80s visiting some of EBE’s worlds.

For a more detailed breakdown of the document’s contents, see my previous articles analyzing these (here and here).

In the leaked 1989 DIA document, Dr. Wood finds a number of reasons that point to its authenticity and why it is an error to simply dismiss it as many UFO researchers have done to date. His detailed analysis of the typing, spelling mistakes, signatures, patents referenced, individuals mentioned, etc., in the document lead to his conclusion that it was a briefing dictated by a member of the Majestic 12 group to two typists. They typed up the 47 pages, a copy of which was preserved on microfilm by the DIA as Dr. Wood explained:

If one contemplates why there were so many errors made in a document officially recorded on a microfilm, and you pronounce the word or phrase on the left and look at the correct one on the right, usually they sound essentially the same. This would be consistent with the document having been created as a result of taking dictation and having two different typists implement the words on paper…

This would be consistent with MJ-12 (stated in this case to be individual MJ-1) having dictated a one-time entry-level summary for the new person, since one apparently was not available from prior written records at the time of the alleged briefing.

The DIA document’s cover page refers to itself as a “preliminary briefing” created by the Defense Intelligence Agency’s Office of Counter Intelligence, on January 8, 1989. The full title of the briefing package is “Assessment of the Situation/Statement of Position on Unidentified Flying Objects”, and it is addressed to the Office of the President. 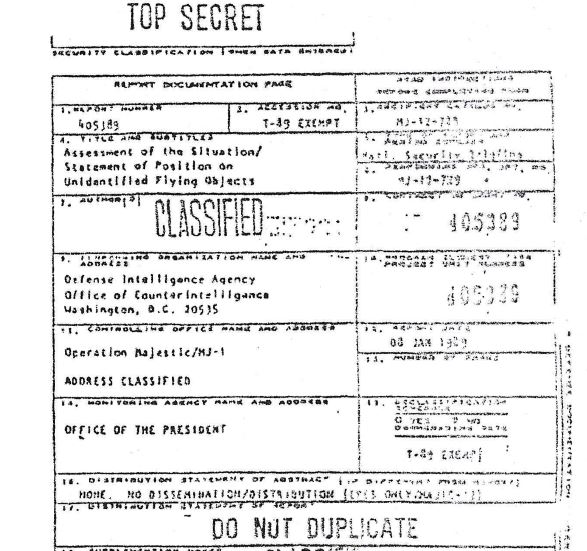 The natural assumption to make is that the briefing was intended for President Elect George Bush, the Vice President at the time and winner of the 1988 Presidential election. However, by analyzing the only signature appearing on the DIA document, Dr. Wood concludes the briefing was actually intended for a distinguished astrophysicist at MIT, Dr. Philip Morrison:

Dr. Morrison began his career as a nuclear physicist who worked on the Manhattan Project and then moved his area of expertise to astrophysics to express his disapproval of the nuclear arms race. He became famous for popular books and documentaries dealing with astrophysics, and continued to be a Professor at MIT. In 1987, Dr. Morrison was the host of a six-part miniseries for PBS called “The Ring of Truth” which examined a number of astrophysics topics.

There is important circumstantial evidence that the DIA document was a briefing dictated by the head of Majestic-12 to Dr. Morrison. In his MUFON article, Dr. Wood mentions that Dr. Morrison was on friendly terms with Carl Sagan, who some believe replaced Dr. Robert Menzel as a member of the Majestic-12 Committee upon the latter’s retirement and/or death in December 1976:

Philip Morrison was a very distinguished professor, who was a protégé of Oppenheimer and very likely was “in the know” on security issues, although I have no evidence of this. There is evidence, however, that he was very collegial with Carl Sagan during his career, helping to arrange a [UFO] symposium at the conclusion of the Colorado study in Boston.

Menzel had been named as MJ-10 on the Eisenhower Briefing document. In his book, Top Secret/MAJIC, veteran UFO researcher Stanton Friedman provided detailed evidence that Dr. Menzel was indeed a member of the Majestic 12 Committee, even though he wrote several books debunking the UFO phenomenon.

He is best known for his popular astronomy books such as Field Guide to the Stars and Planets (1964). Either prior to or shortly after Menzel’s death, the Majestic 12 Committee was looking for an astronomer/astrophysicist that could replace him. The replacement would have to have a firm scientific grounding in astronomy/astrophysics, broad public outreach, and have received Menzel’s recommendation prior to his death.

Dr. Sagan fit the bill with his scientific pedigree while a Fellow at Berkeley University when his work on NASA missions to Venus and Mars received widespread scientific recognition. Most importantly, his scientific work came to the attention of Dr. Menzel, who arranged for Sagan to be given an Assistant Professor position at Harvard University (1963-1968). Sagan moved to Cornell University, after he was denied tenure at Harvard, ironically due to the growing popularity of his generalist approach to science. Nevertheless, Menzel remained a firm supporter of Sagan.

Sagan achieved celebrity status through his popular books and documentaries, including his award winning Cosmos which aired on PBS in 1980 and was seen by 500 million people across 60 countries. If a position was reserved on the Majestic 12 Committee for a leading astronomer/astrophysicist with outreach to a global audience through popular books and television documentaries, and the approval of the previous position holder, then Sagan was the natural replacement for Menzel.

Similarly, by January 1989, when the Majestic 12 Group was looking for a replacement or an alternate to Dr. Sagan, due to impending retirement (he had likely been in the position since at least 1976) or some other reason (Sagan died on December 20, 1996), Dr. Morrison was a solid choice given his scientific pedigree, broad public outreach, and prior friendly relationship with Sagan. This is important circumstantial evidence in support of the authenticity of the DIA briefing document.

Also, the fact that the 1989 document was merely a briefing dictated by the head of the Majestic 12 Group for a new member taking up Dr. Sagan’s position, meant that not that much in the way of resources would have gone into preparing the briefing document.

The ad hoc nature in which the document was assembled, helps explain the notable security marking inconsistencies, spelling errors, cut and pasting of different documents together, etc., as many critics have pointed out.

In his MUFON article, Dr. Wood concludes in favor for the authenticity of the leaked 1989 DIA document with a number of compelling reasons despite its multiple errors. By identifying Dr. Morrison as the recipient of the briefing, rather than Vice President (President-Elect) Bush, Dr. Wood has provided the means of corroborating the document’s authenticity. Was Dr. Morrison being briefed as Dr. Sagan’s replacement on the MJ-12 Committee due to the latter’s retirement as a result of coming up to some kind of term limit due to his 13 years or more service as MJ-10?

As I mentioned in previous articles supporting the authenticity of the DIA document, its contents contain a wealth of information on topics such as the 1948 Aztec UFO crash; diplomatic relations between the Eisenhower administration and alien life; the role of Nikola Tesla in starting the modern UFO era; and the fact that human looking extraterrestrial are friendly and have been secretly living among humanity for decades.

Dr. Wood has performed a very valuable public service in authenticating the 1989 DIA document, opening the door to further close study of its rich contents and significant exopolitical implications.