On January 16, the head of Harvard University’s astronomy department, Prof. Abraham Loeb, gave an interview where he defended his controversial paper that the interstellar object detected by a Hawaii based telescope on October 19, 2017, and named “Oumuamua”, was a spacecraft of some kind. While astronomers continue to debate the scant scientific data gleaned from telescopes to determine Oumuamua’s origins and nature, a whistleblower/insider’s report of an alleged covert space mission to Oumuamua that acquired much scientific data after landing on it is being ignored.

While astronomers might be forgiven for ignoring insider/whistleblower reports of covert missions to artifacts in the solar system due to a lack of corroborating scientific data, political scientists interested in space affairs, which falls under the rubrics of “astropolitics” or “exopolitics”, do not have such a luxury. Insiders/whistleblowers provide a rare glimpse into the rarified world of highly classified compartmentalized projects and therefore their claims need to be investigated since corroborating evidence may be absent due to the classification process, rather than being non-existent. If found to be credible insider/whistleblower claims need to be analyzed with regard to available scientific data as outlined in a 2014 paper published in the Astropolitics Journal.

Before examining the alleged covert mission that landed on Oumuamau, it’s worth reviewing what astronomers have said about it to date.

In a TED talk published on July 19, 2018, the astrobiologist, Dr. Karen J. Meech, discussed what was known about Oumuamua which was given the formal designation of 1I/2017 U1. She explained the excitement of astronomers who had long awaited the arrival of the first object from another solar system. They initially gave it the informal name of Rama, after the derelict spacecraft depicted in Arthur C. Clark’s 1973 novel, Rendezvous with Rama that was spotted after passing close by the Earth.

Meech explained in her TED talk that this was not deemed suitable. As will be later explained, the name Rama was in fact very appropriate given how a secret space program organized a landing mission.

Given that the interstellar object was discovered from the Pan-STARRS telescope on Haleakala Observatory on the Hawaiian island of Maui, two Hawaii culture experts were consulted. They named it Oumuamua – Hawaiian for “scout or messenger from distant past reaching out to us”. The images taken by the Hubble and Pan-STARRS telescopes were quite faint, so not much could be learned about Oumuamua’s geometry and composition.

Nevertheless, the initial artist depiction was of it being a long-cigar shaped object that was turning and rolling along its interstellar orbital path as though violently ejected from some distant stellar event that occurred in the remote past. 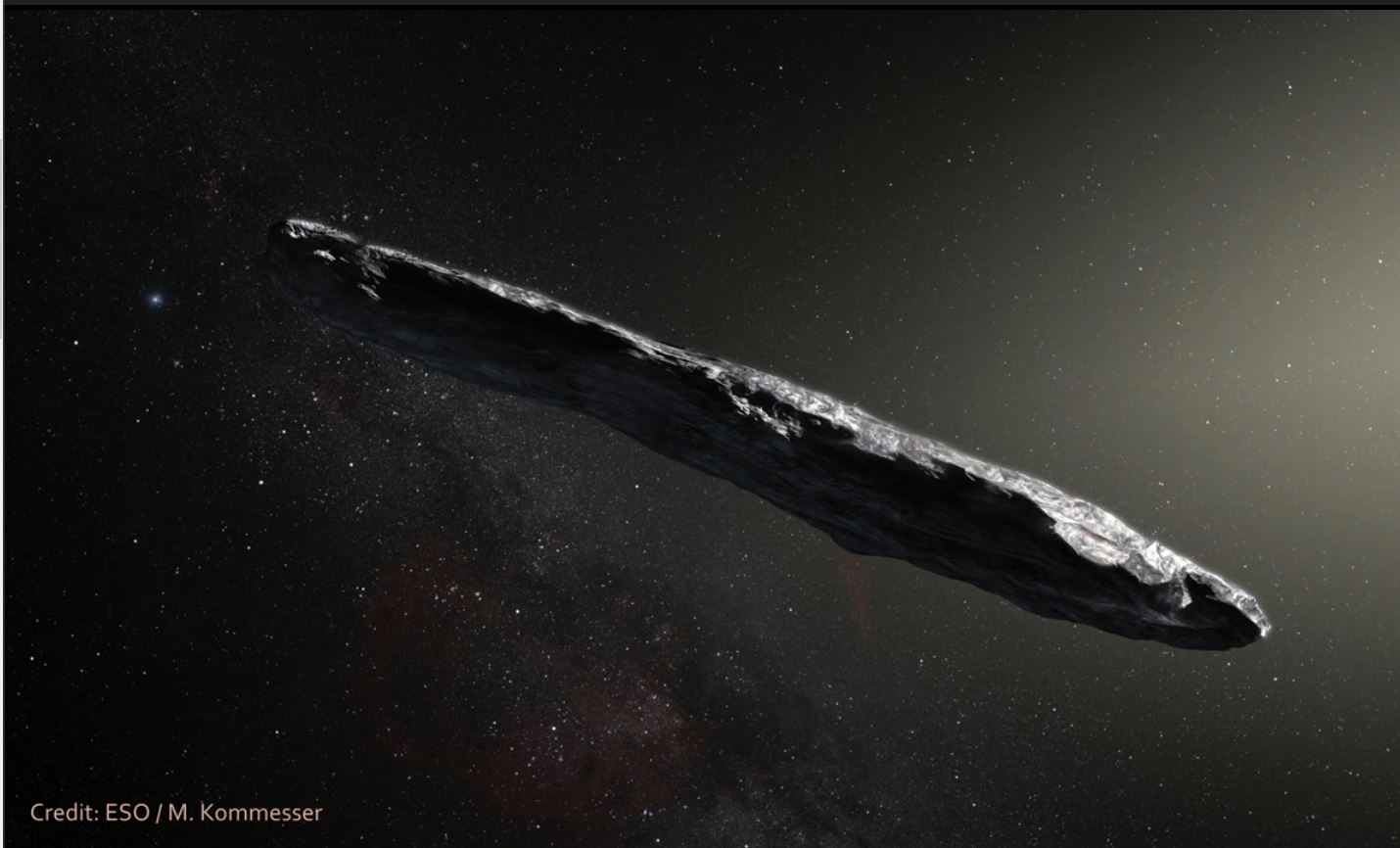 What really attracted scientific attention was when Oumuamua accelerated as it approached the sun according to data provided by the Hubble telescope in June 2018.

While acceleration is normal for comets that have long icy tails which ignite thereby propelling the comet forward, Oumuamua was no comet. Somehow the sun’s solar energy appeared to be accelerating Oumuamua.

This led to Prof. Loeb and his colleague from the Harvard Smithsonian Center for Astrophysics, Dr. Shmuel Bialy, speculating that Oumuamua may have contained a solar sail and was therefore being charged up and accelerating as it received the solar energy. They presented their conjecture in a paper titled, “Could Solar Radiation Pressure Explain Oumuamua’s Peculiar Acceleration?” and wrote:

Considering an artificial origin, one possibility is that ‘Oumuamua is a lightsail, floating in interstellar space as a debris from an advanced technological equipment… The lightsail technology might be abundantly used for transportation of cargo between planets … or between stars…In the former case, dynamical ejection from a planetary System could result in space debris of equipment that is not operational any more … and is floating at the characteristic speed of stars relative to each other in the Solar neighborhood. This would account for the various anomalies of ‘Oumuamua, such as the unusual geometry inferred from its lightcurve … its low thermal emission, suggesting high reflectivity … and its deviation from a Keplerian orbit … without any sign of a cometary tail … or spin-up torques …

Bialy and Loeb went on to offer an even more exotic explanation that Oumuamua is an interstellar probe that is basically at rest relative to other stars in our local stellar cluster:

Alternatively, a more exotic scenario is that ‘Oumuamua may be a fully operational probe sent intentionally to Earth vicinity by an alien civilization…. This discrepancy is readily solved if ‘Oumuamua does not follow a random trajectory but is rather a targeted probe. Interestingly, ‘Oumuamua’s entry velocity is found to be extremely close to the velocity of the Local Standard of Rest, in a kinematic region that is occupied by less than 1 to 500 stars.

In his January 16 interview Loeb elaborated on the idea of Oumuamua being a kind of interstellar probe or buoy powered by solar sails that once monitored space traffic in our local region of the galaxy:

“If you average the velocities of all the stars in the region … you get a system that’s called the ‘local standard of rest.’ Oumuamua was at rest relative to that system. It didn’t come to us. It waited in place, like a buoy on the surface of the ocean, until the ‘ship’ of the solar system ran into it. To make things clear, only one of 500 stars in the system is as much at rest as Oumuamua…

Loeb in his interview explains that he and his colleague Bialy are not the only astronomers questioning whether Oumuamua is an extraterrestrial spacecraft, but they are reluctant to publicly state their opinions given the paucity of data gleaned from the Pan-STARRS and Hubble telescopes.

What would greatly surprise Loeb and other astronomers is that much more scientific data about Oumuamua has been gathered, but this had been classified at a very high level of national security.

According to Corey Goode, who claims to have worked on multiple secret space programs, he watched a video recording of a covert landing mission to Oumuamua conducted by an alliance of these programs that first observed it prior to its entry into our solar system. This is particularly significant given that Oumoamoa’s “official” discovery on October 19, 2017, was after it had passed the sun and was flying past Earth on the outbound portion of its interstellar journey. 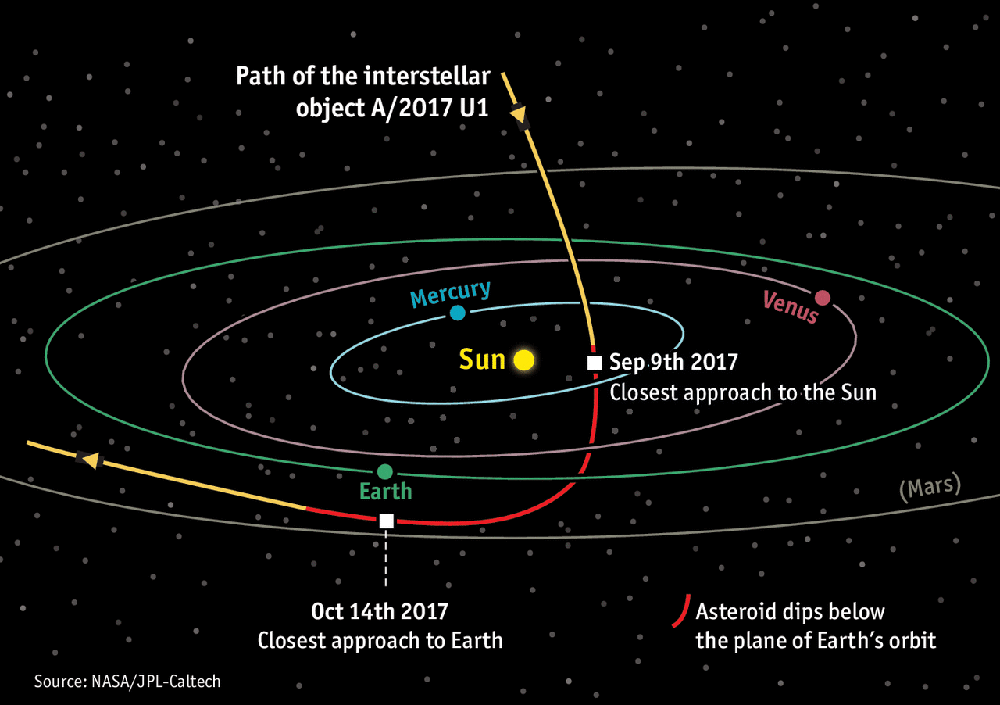 Goode’s credibility as a genuine insider was recently given a dramatic boost with confirmation of two Defense Intelligence Reference Documents (DIRD) dealing with “warp drives” and “traversable wormholes” that he was the first to publicly release in late 2017. The documents showed the scientific feasibility of advanced propulsion technologies that Goode had claimed were used in secret space programs.

The two documents were part of a list of 38 “Unclassified: For Official Use Only” documents that the Defense Intelligence Agency confirmed as authentic on January 16, 2019 in response to a Freedom of Information Act request by the Federation of American Scientists.

The recent confirmation of Goode’s leaked DIRD documents means that his testimony about Oumuamua cannot be simply dismissed out of hand, and is well worth considering by astronomers seeking answers to Oumuamua’s origin and composition.

In January 2018, Goode provided a detailed description of what he saw in a video shown to him and others attending a briefing concerning recent covert space activities. Goode wrote about what he witnessed along with the explanation by a former USAF officer [Sigmund] participating in the briefing:

The person leading the meeting then brought our attention to a large smart-glass pad monitor that was lowering from the ceiling. Sigmund then stood up and said “I have a treat for the both of you.” He walked up to the monitor and stared at it while talking. He stated that they had been monitoring what appeared to be a derelict space craft that was headed towards our Sol System.

This would prove to be the same cigar-shaped “asteroid” that NASA and the mainstream media dubbed Oumuamua, and publicized widely in this same timeframe.

Goode next explained what he was told about secret space mission sent to observe and land on Oumuamua:

Sigmund puffed up proudly and stated, “I led an expedition to see who this craft belonged to. Wait until you hear what we found.” Suddenly we started seeing all sorts of readings and telemetry on the monitor. I could also hear what sounded like an old NASA radio transmission. There were beeps along with a pilot calling in positions of his craft, as well as the one he was trying to dock with. That lasted for about five minutes as I saw the two craft spiraling closer and closer together.

As the pilot matched the spin of the object they were approaching, you could see a long cigar-shaped structure that had shiny patches of what looked like ice on the outside. It was obviously made of stone, and looked as if it had been through many meteor showers and collisions. The video broke to a scene where a few people who were suited up in space suits were pushing themselves through what looked like a bored-out hole going down into the rock.

The shuttle had docked with the mystery vessel close to what looked like a metallic oval dome, which was sitting about a third of the way down its fuselage. It appeared to have been breached many times, and was full of holes and dents from obvious impacts. In the next scene, you could see the men in a weightless environment, with lights on their chests, helmets and the tops of their wrists. They split up and were talking to each other through the communications systems in their suits.

One of them was chipping samples out of the icy residue on the floors and walls. This same frozen, organic sludge was on the outside of the ship as well. It appeared like foamy, dirty lake water that had been frozen. The ship was obviously very ancient. It had been boarded and stripped of technology many times by unknown races.

Sigmund stated that when they tested the sludge later, they determined that it was partly the remains of the original crew. There were many panels removed from the walls, ceilings and floors, leaving empty compartments where technology was once located.

Goode went on to describe the discovery of preserved bodies of former crew members, the identity of an ancient extraterrestrial race they belonged to, the craft being trapped in orbit for millions of years, and a hieroglyphic language found inside the craft.

All this might sound incredible to astronomers relying on the scant data provided by the two telescopes that observed Oumuamua from a great distance. Goode’s release of DIA documents showing the feasibility of advanced propulsion systems such as warp drives, gives a degree of credibility to his claim that a covert space mission to Oumuamua was conducted and recorded on video.

It is certain that the video Goode witnessed has been shown to many scientists with need to know inside the covert world of secret space programs. The similarity of Goode’s account with what Clark described in Rendezvous with Rama is extraordinary. Perhaps Prof. Loeb and Dr. Bialy may have been made aware of such extraordinary information and are presenting their Oumoumou spacecraft hypothesis to open the minds of incredulous colleagues . Eventually, such classified data will be revealed to give a much more accurate and fuller picture of objects such as Oumuamua entering or inside our solar system, and the classified missions to these conducted by multiple secret space programs.