The National Security Agency has responded to a Freedom of Information Act (FOIA) request concerning direct communications between Seth Rich, a former staffer for the Democratic National Committee, and Julian Assange and/or Wikileaks. The NSA issued a “Glomar Response”, where it chose to neither confirm nor deny the requested information due to its existence or “non-existence” being “properly classified”.

The NSA response reveals that communications between Rich and Assange/Wikileaks are subject to classification laws. Their release will have major national security implications that directly impact US Russia relations, and may facilitate disclosure of suppressed secret space program technologies.

I filed the FOIA request after communicating with Ty Clevenger, Esq., who had on October 10, 2017, filed an FOIA request regarding communications between Rich and Assange, along with many other individuals. In his original FOIA letter to the NSA, Clevenger requested:

The NSA wrote a final response to Clevenger on October 4, 2018:

Your request has been processed under the provisions of the FOIA. Fifteen documents (32 pages) responsive to your request have been reviewed by this Agency as required by the FOIA and have found to be currently and properly classified in accordance with Executive Order 13526. These documents meet the criteria for classification as set forth in Subparagraph © of Section 1.4 and remains classified TOP SECRET and SECRET. (pdf available here)

The Clevinger’s FOIA request and the NSA’s response was the subject of an article by Mark McCarty published by Medium.com on April 19, 2019, where he analyzed its consequences for those claiming Rich was the real source of the DNC emails being handed over to Wikileaks. Unfortunately, McCarty’s article was taken down by Medium.com and he was removed as an author from the site in what appears to be a flagrant case of censorship. 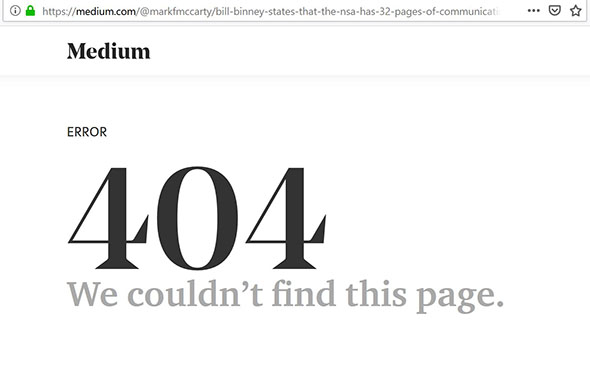 I wrote an article on April 25, 2019 commenting on the issues raised in McCarty’s article and NSA’s response to Clevinger’s FOIA request. Of particular interest was what a prominent NSA whistleblower, William Binney, had to say about the NSA’s response:

“Ty Clevenger has FOIAed information from NSA asking for any data that involved both Seth Rich and also Julian Assange.

And they responded by saying we’ve got 15 files, 32 pages, but they’re all classified in accordance with executive order 13526 covering classification, and therefore you can’t have them.

In closely examining Clevinger’s request and the NSA’s response, what is left unclear is exactly who Rich was communicating with that the 15 documents (32 pages) were referring to.

This was due to the initial FOIA request by Clevinger being very broad in scope since it asked for multiple individuals that Rich was communicating with in addition to Assange/Wikileaks. Basically, the NSA’s response, as cited above, made it unclear whether the information it had concerned communications between Rich and Assange, or Rich and one of the other named parties.

In order to narrow the scope of the inquiry into Rich’s communications, I filed my own FOIA request to the NSA on April 27, 2019:

I am researching the circumstances surrounding the death of Seth Conrad Rich (“Seth Rich, born January 3, 1968), who was murdered in the District of Columbia on July 10, 2016. I request all documents, records, or correspondence referencing or containing communications between Seth Rich and Julian Assange or Wikileaks. 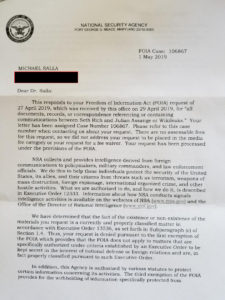 I received the following response by the NSA on May 1, 2019.

We have determined that the fact of the existence of non-existence of the materials you request is a currently and properly classified matter in accordance with Executive Order 13526, as set forth in Subparagraph (c) of Section 1.4. Thus, your request is denied pursuant to the first exemption of the FOIA which provides that FOIA does not apply to matters that are specifically authorized under criteria established by an Executive Order to be kept secret in the interest of national defense or foreign relations and are, in fact properly classified pursuant to such Executive Order.”

Here is the relevant Section 1.4 referred to by the NSA with emphasis on subparagraph (c):

Sec. 1.4. Classification Categories. Information shall not be considered for classification unless its unauthorized disclosure could reasonably be expected to cause identifiable or describable damage to the national security in accordance with section 1.2 of this order, and it pertains to one or more of the following:

The NSA’s response is known as a “Glomar Response”, which is different from a regular denial of a request for official government records as explained by Nate Jones from Unredacted.com:

The Glomar Response is different than a regular FOIA denial—when an agency states that it has the records but that it will not release them.  When an agency replies with a Glomar Response, it refuses even to admit that documents exist; this makes research (and the appeals process) much more difficult.

The NSA’s decision of neither confirming nor denying the existence of direct communications between Rich and Assange/Wikileaks affirms that the NSA is unwilling to directly admit such correspondence exists and makes it difficult for researchers to reach a definitive answer. Nevertheless, what the NSA’s response does reveal is that the alleged communications between Rich and Assange/Wikileaks are a matter of national security.

The NSA response is a startingly admission given what has been previously learned about Rich’s role in handing over the DNC emails to Assange and Wikileaks as discussed in my previous article on Rich. Basically, we know that law enforcement sources told journalists Seymour Hersh and Sean Hannity/Fox News that Rich was the source for the DNC party email links.

In addition, Binney was part of a group of former U.S. intelligence officers that wrote a report released on July 24, 2017 explaining why it was impossible for the DNC files to have been downloaded by online hackers, and the most likely explanation was an inside source with direct access to the DNC server who leaked the files through a thumb drive:

Forensic studies of “Russian hacking” into Democratic National Committee computers last year reveal that on July 5, 2016, data was leaked (not hacked) by a person with physical access to DNC computer. After examining metadata from the “Guccifer 2.0” July 5, 2016 intrusion into the DNC server, independent cyber investigators have concluded that an insider copied DNC data onto an external storage device.

The NSA’s responses to Clevinger and my FOIA requests take on even more significance given recent attempts to debunk any purported connection between Rich and Assange/Wikileaks. Michael Isikoff, writing for Yahoo News on July 9, 2019, insisted that the Russians were the real source of the leak and not Rich:

Russian government-owned media organizations RT and Sputnik repeatedly played up stories that baselessly alleged that Rich, a relatively junior-level staffer, was the source of Democratic Party emails that had been leaked to WikiLeaks. It was an idea first floated by WikiLeaks founder Julian Assange, who on Aug. 9, 2016, announced a $20,000 reward for information about Rich’s murder, saying — somewhat cryptically — that “our sources take risks.”

Many mainstream news sources ran with Isikoff’s story which neglected to discuss Binney’s intelligence assessment, the NSA FOIA responses, and what Seymour Hersh had been told about Rich being the source for the leak. It appeared that Isikoff’s story was an attempt to get in front of a developing story stemming from Assange’s looming extradition to the US, and his expected testimony tying Rich to the DNC emails released by Wikileaks.

The conclusion that emerges from the NSA FOIA responses and what other researchers have revealed is that the Deep State has framed Russia for a domestic leak by a disgruntled DNC employee, Seth Rich. The Deep State’s purpose was to undermine Trump’s presidential campaign and his subsequent administration through concocted Russia collusion charges, and to impede meaningful cooperation between Trump and Putin on a host of global policy issues.

One of these global policy areas concerns the official disclosure of exotic aerospace technologies secretly used by the US and Russia in their respective secret space programs, which I have described elsewhere. The disclosure of such technologies could do much to resolve global security and energy problems, but would have major repercussions for the petroleum and pharmaceutical industries that are dependent on antiquated fuel and medical technologies.

What has clearly emerged since the DNC emails were leaked is that the mainstream news media, along with major social media companies such as Facebook, YouTube, Twitter, and Google, have all colluded to deceive the US and the global public over the real source of the leaked DNC emails. As the truth emerges about Rich being the true source for emails leaked by Wikileaks in 2016, the role and power of the Deep State in manipulating public opinion so brazenly for over two years is about to be exposed. This exposure will open the door for exotic technology disclosures that can revolutionize life on our planet.

Note: Special thanks to Ty Clevenger who kindly gave me permission to release his original FOIA request and the NSA’s response. 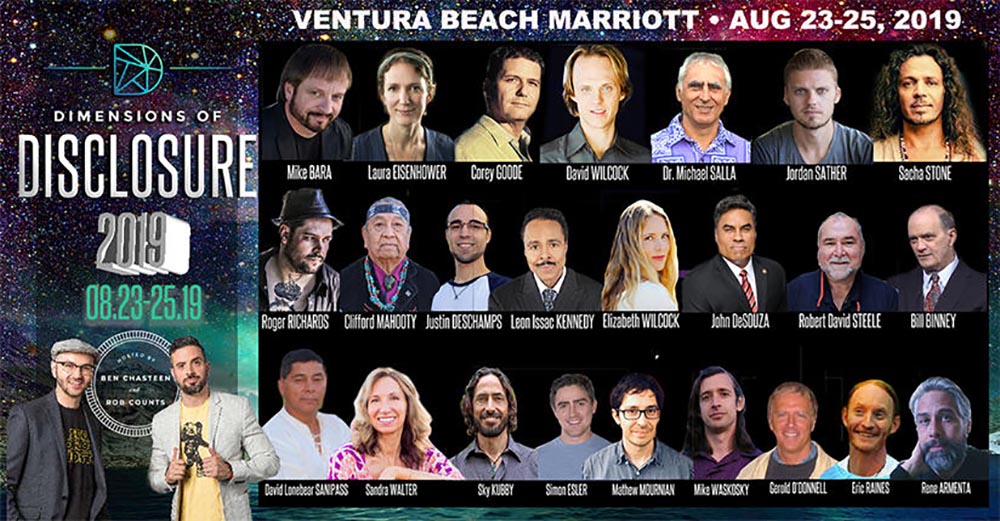