After the November 4, 2019 emergence of a former USAF Intelligence Specialist, Mike Turber, claiming that the 2004 Tic Tac sightings recorded by Navy pilots were antigravity spacecraft belonging to the USAF, three Navy witnesses have come forward confirming key parts of Turber’s ground-breaking testimony. Turber and the Navy witnesses testimonies are important since the US Navy has confirmed the authenticity of the video showing the Tic Tac incident, and given an official briefing to Congress and President Trump about what transpired.

Turber says the fleets of Tic Tac shaped craft recorded by ships and aircraft belonging to the Nimitz Aircraft Carrier group between November 10 to 14, 2004, were being flight-tested by the USAF against the Navy’s best radar recording technologies and intercept aircraft. Turber asserted that Air Force personnel boarded different Navy ships to confiscate the flight recordings of the UFOs that attained speeds of 24,000 mph in the air and over 500 mph under the water.

Turber claimed that there were five Tic Tac craft that had been sighted and recorded by the carrier group, but Navy commanders were not too perturbed. He said senior Navy officers were aware that the Tic Tac craft were highly classified USAF craft being tested against the Navy’s best surveillance, tracking and intercept technologies at the time.

Corroboration of Turber’s key claims emerged on January 20, 2020, when Patrick “PJ” Hughes, a Petty Officer on the aircraft carrier, USS Nimitz, was interviewed by Jim Breslo, who was the first to interview Turber back on November 4, and again on December 2, 2019.

Hughes says that he was responsible for preparing the electronic recording and communications systems for the E-2C Hawkeye aircraft based on the Nimitz, which provide eye-in-the-sky command and control functions for air traffic near the battle group. Hughes explained how all radar and other electronic surveillance data, some of which remains classified even today, was accumulated by the Hawkeye for subsequent analysis by Navy intelligence specialists.

The Hawkeye recorded all the radar and other electronic data acquired by the F/A-18 Super Hornets intercepting the Tic Tac craft, as well as its own data recordings. 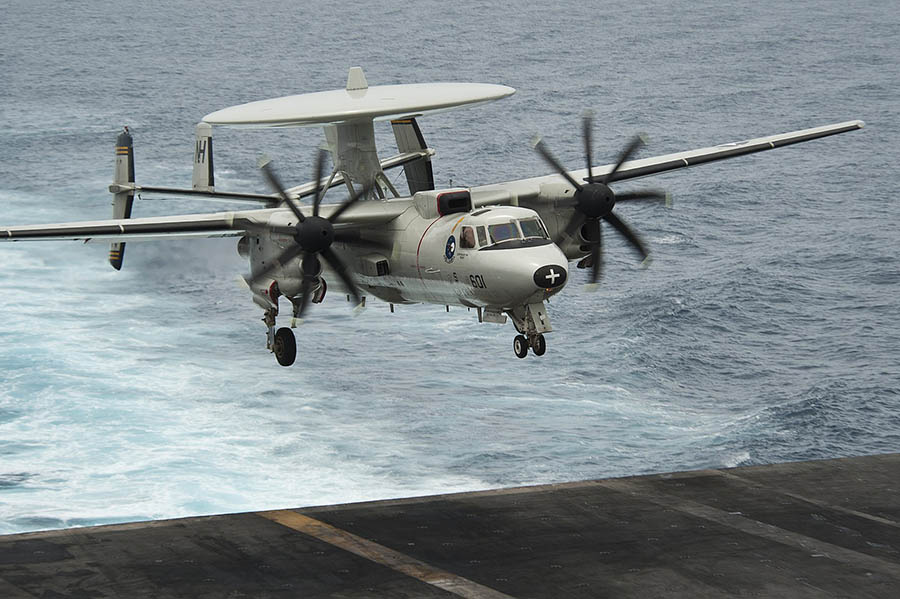 An-2C Hawkeye about to land on the USS Nimitz: Source: Wikimedia

Hughes says that after the Hawkeye landed with all the radar and other intelligence data accumulated of the flight behavior of the Tic Tac shaped craft, two USAF personnel were accompanied by his commander, and took the two bricks (hard drives) from the Hawkeye that Hughes had placed in a safe. Hughes added that when he began to sign out the two bricks as part of his standard operating procedure, his commanding officer told him to stop and made it clear that the bricks were to be taken by the Air Force personnel without any record being kept.

This incident is key evidence that senior Navy officials were aware that the Tic Tac craft were involved in some classified project, and that there was high-level cooperation between the USAF and Navy over the course of the week when the Tic Tacs were sighted and recorded.

Hughes’ testimony confirms Turber’s account that two Air Force officials took all the data of the Tic Tac craft, and that over the course of the week-long sightings, USAF officials were working closely with the Navy in controlling information about the UFO sightings.

This is important corroboration for Turber and his confidential sources on the true origins of the Tic Tac craft seen near the Nimitz carrier group, and the related January 16, 2015 UFO incidents off the coast of Florida Coast that were witnessed and recorded by military personnel from another carrier group led by the USS Roosevelt.

Hughes also confirmed that the two pilots and three crew members of the Hawkeye visually sighted the Tic Tac craft which flew only a mile away from them before speeding off. They gave similar descriptions of it being a white Tic Tac shaped craft that was about 40 feet long, and capable of fantastic flight maneuvers.

Hughes explained that all five crew members were debriefed after the incident and had to sign Non-Disclosure Agreements (NDA). This again helps corroborate what Turber revealed in his November 4, 2019 interview. Fortunately, Hughes was not required to an NDA on the Tic Tac incident, even though signing NDA’s was a regular occurrence during his Navy career.

In addition, Gary Voorhis, another Navy whistleblower has come forward to say that something similar happened on the USS Princeton, where two men in plain clothes confiscated all the ship’s sophisticated Aegis and other electronic tracking data recorded of the Tic Tac craft.

These technologies included the newly installed SPY-1 radar according to Paco Chierici, a former Navy pilot who wrote the first article on the Tic Tac incident based on a classified Naval Intelligence study he was given. In his March 14, 2005, article, Chierici said the SPY-1 radar tracked the Tic Tacs from as high as 80,000 feet to 50 feet above sea level in a few seconds, a capability that was not possible with previous Navy radar systems.

Voorhis was also interviewed by Breslo as part of an in-depth series of interviews casting new light on the true origins of the Tic Tac craft, and the mounting evidence that these were secret USAF craft being tested against the Navy’s best recording devices and pilots.

While Voorhis was unable to verify that the two officials were USAF personnel, he pointed out that the Princeton carried state of the art electronics surveillance equipment, which would be the logical place for testing prototype aircraft. Precisely what Turber had pointed out in his first interview.

Similarly, Hughes pointed out that the 2015 UFO incidents captured on video and generally known as the Gimbal and GoFast videos also involved the Navy’s latest generation of electronic surveillance and intercept craft.

Finally, Breslo interviewed another Navy witness to the Tic Tac events, Kevin Day, who was stationed on the USS Princeton and was in charge of the newly installed SPY-1 radar that was monitoring all air traffic. Day described the radar tracking of the Tic Tac’s dropping from 28,000 feet to only 50 feet above sea level in a matter of seconds, which in his opinion defied the known laws of physics.

Day described both the Captain of the USS Nimitz and the Admiral in charge of the Nimitz battle group showing a surprising “lack of curiosity” over the UFO sightings. This corroborates what Turber had to say about senior Navy officials having been briefed about the Tic Tacs.

Additionally, Day said that when he tried to find the radar tracking of the Tic Tac craft and the Navy interceptors to file an after-action-report, all data was gone. This corroborates what Voorhis claims happened after two unknown persons confiscated all the recorded data.

Consequently, Mike Turber’s testimony that the Tic Tac sightings in 2004 involved the testing of classified hybrid aerospace vehicles capable of traveling underwater and into space is supported to significant degrees by three Navy personnel who were eyewitnesses to events that transpired during the November 2004 Tic Tac sightings.

Hughes, Voorhis and Day’s respective testimonies adds to growing confidence that the Tic Tac shaped craft will be among the first declassified aerospace platforms to be revealed by the newly formed Space Force as predicted by Turber. Given the rapid advances in the setting up of Space Force, we may not have to wait to long to discover the official truth behind the Navy UFO sightings in 2004 and 2015.