The US Senate Select Committee for Intelligence has just approved a bill that includes a request for the Intelligence Community to write up a comprehensive report on Unidentified Aerial Phenomena (UAPs, aka UFOs) in 180 days. Most importantly, the report will be unclassified, meaning that its findings are intended to be released to the general public.

The eventual Intelligence Community report is intended to be a comprehensive interagency breakdown and analysis of what’s behind the UAP phenomena. Will the report turn out to be  the official disclosure announcement that UFO activists have been working towards for decades, or will it become a limited hangout to hide the  truth?

In the comments portion of the proposed Intelligence Authorization Act for Fiscal Year 2021 there is a section titled “Advanced Aerial Threats”, which begins by asserting the Committee’s concerns that no unified reporting mechanism exists for UAPs/UFOs given the potential threat they pose to US national security:

The Committee supports the efforts of the Unidentified Aerial Phenomenon Task Force at the Office of Naval Intelligence to standardize collection and reporting on unidentified aerial phenomenon, any links they have to adversarial foreign governments, and the threat they pose to U.S. military assets and installations. However, the Committee remains concerned that there is no unified, comprehensive process within the Federal Government for collecting and analyzing intelligence on unidentified aerial phenomena, despite the potential threat.

It’s important to emphasize that the Committee is particularly concerned about UAPs and “any links they have to adversarial foreign governments.”

The bill goes on to propose that the Director of National Intelligence (DNI) oversees the development of a comprehensive report:

Therefore, the Committee directs the DNI, in consultation with the Secretary of Defense and the heads of such other agencies as the Director and Secretary jointly consider relevant, to submit a report within 180 days of the date of enactment of the Act, to the congressional intelligence and armed services committees on unidentified aerial phenomena (also known as ‘‘anomalous aerial vehicles’’), including observed airborne objects that have not been identified.

The Senate Committee next outlines the different intelligence sources that are required to submit information for the report. The exhaustive listing shows that the report is intended to be very comprehensive:

The Committee further directs the report to include:

What’s noteworthy in the Committee’s request is that there will be an official who will be given responsibility for overseeing the interagency process for releasing all UAP/UFO data. In addition to the intelligence community, this also includes the FBI and its ongoing investigations of UAPs.

China, in particular, has made incredible strides over the last few decades in developing a secret space program based on advanced aerospace technology secrets and designs obtained from the US Air Force. In fact, the lead Chinese scientist who set up their secret space program, Dr. Tsien Hsue-shen (aka Qian Xuesen) began his career by working for the US (Army) Air Force in the 1940s, and co-wrote the blueprints for future advanced aerospace technologies based on retrieved Nazi and crashed UFO craft. To learn more about China’s secret space program, see my upcoming webinar series beginning July 11, and book, Rise of the Red Dragon (April 2020). 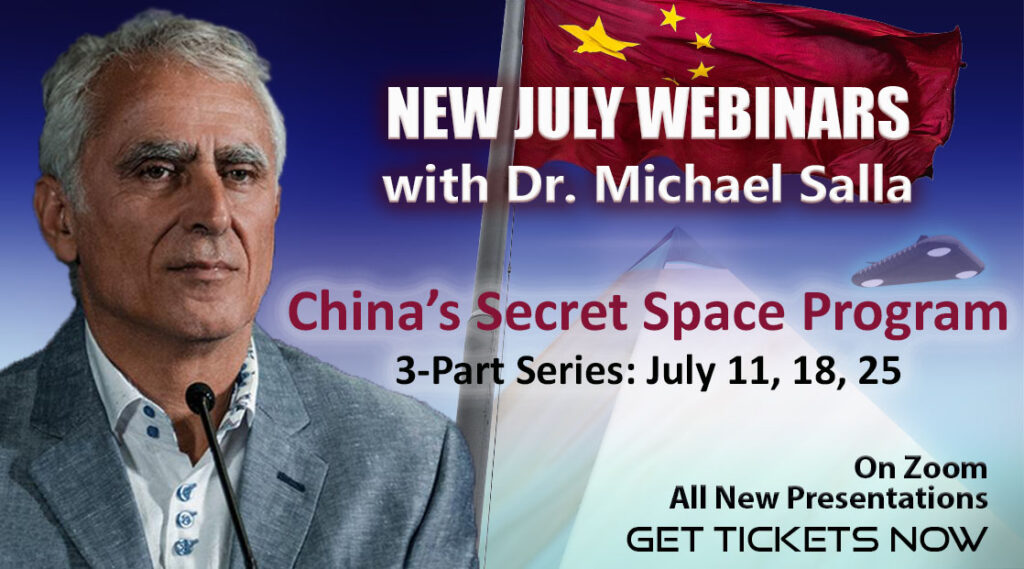 It’s important to keep in mind that the Advanced Aerial Threats section included in the bill just passed by the Senate Intelligence Committee still has to pass the full Senate. It then needs to be similarly passed by the House of Representatives, and finally signed into law by President Donald Trump. It’s not clear exactly when the bill will be enacted into law, but once it is, the 180 day countdown for the report’s release will begin.

Given the bill was passed on a bipartisan basis (14 votes in favor, 1 against), it can be concluded with great confidence that in early 2021, the US public will get to read a comprehensive UAP report by the Intelligence Community.

According to Tom DeLonge, the request is a result of strong lobbying by his To The Stars Academy (TTSA).

Very proud that @TTSAcademy DID THIS— We galvanized Senators, organized briefings, submitted Natl’ Security language and wrote Op-Eds in major news outlets to achieve page 11 in the below link. THIS is how we get to DISLCOSURE https://t.co/rHTReJDdiQ

The involvement of DeLonge and his TTSA in lobbying for passages dealing with “Advanced Aerial Threats” does raise suspicions over the real agenda behind the request for a comprehensive report. Is the request for a UAP report something to be embraced as the long-awaited official disclosure anticipated by DeLonge and the UFO community, or is it a limited hangout by the Deep State designed to raise money for corporate run classified programs?

In the past, I’ve raised my concerns that DeLonge and his TTSA are involved in a limited hangout and is heavily influenced, if not controlled, by compromised Deep State officials. Yet, there’s no doubt that the impending passage of the Intelligence Authorization Act with passages on “Advanced Aerial Threats” is a major step forward that carries great significance for the UFO Disclosure Community.

The fact that it is happening after a new DNI Director, John Ratcliff, was officially confirmed by the US Senate on May 21 is a very encouraging sign. Ratcliff is a strong ally of President Trump, and has the authority to put a White Hat in charge of overseeing the interagency effort to release information to be included in a comprehensive report on UAPs/UFOs.

It’s perhaps no coincidence that in a June 18 interview, Trump was asked about UFOs by his son, Don Jr. President Trump said that information about Roswell is very interesting and that he will consider declassifying it in the future. Could the Intelligence report to be issued by Ratcliff be a vehicle for disclosure of many secrets behind the Roswell crash and Area 51?

Rather than the requested Intelligence report being a Deep State orchestrated limited hangout, as contended by some of DeLonge’s critics, it can very easily become a means for White Hats in the Trump administration to officially disclose major components of secret space programs developed by its major adversaries, China and Russia.

Once the Intelligence Community releases its report on the foreign aerospace technologies possessed by China, Russia and other “foreign” sources linked to UAP sightings, the stage will be set for the future disclosures concerning the USAF’s own secret space program, which is currently in the process of being transferred to the newly created Space Force.

Ratcliff and White Hats in the Trump administration can use the requested report to disclose to the America public important truths about suppressed advanced aerospace technologies and secret space programs.

The disclosures on UAPs and UFOs that lie ahead promise to be momentous even if the original intent in the Congressional bill was to limit the report to what China and Russia have secretly developed. Predictably such revelations will lead to calls for Congress to massively increase funds for Space Force so it can quickly develop and deploy similar technologies for national security purposes.

Clearly, the November 3 Presidential elections will impact on what comes out in Ratcliff’s UAP report anticipated in early 2021. Assuming President Trump wins re-election, then he and Ratcliff will be in a powerful position to disclose far more than merely what the Intelligence Community suspects China and Russia have secretly developed in the aerospace arena.

Ratcliff’s UAP report may well be part of an elaborate plan for a decades-old USAF secret space program being covertly transferred to Space Force, and then disclosed by Trump to the American public as newly acquired technologies developed in response to the threat posed by China and Russia’s secret space programs. While such a process would be disingenuous, it would nevertheless be a stepping stone to the public release of many revolutionary aerospace technologies that could transform life on our planet.