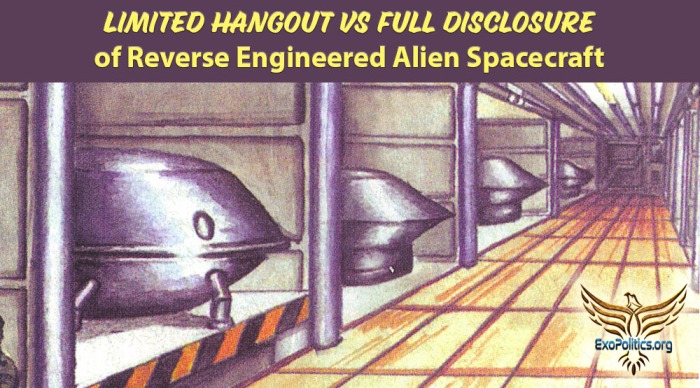 Classified briefings given to staffers and officials from the U.S. Congress and Pentagon by Dr. Eric Davis on UFO/UAP reports have taken on great significance due to a July 23 New York Times story breaking the news that they were being briefed about “off-world vehicles not made on this earth”. In part one of this series, I discussed a 2019 interview with Dr. Davis, where he shared his knowledge of Special Access Programs, including a UFO crash retrieval project as providing the best insight into what he revealed in his classified briefings.

In the interview, Davis spoke of the lack of success scientists had in reverse engineering the “off-world vehicles” due to difficulties in understanding the new physics operating in the recovered craft. Of particular note was his belief that the reverse engineering program suffered from a lack of funding, which he explained as follows:

[1:23:43 Y.T.] So here’s the thing that you should know is that the crash retrieval program is a very small program. It is not a massive, huge government infrastructure…. It’s a very poorly funded program, and it hasn’t actually, probably hasn’t had money for a while.

Davis’ comment aligns with the revelations of Bob Lazar, who says he was recruited in late 1988 for a reverse engineering program at the remote S-4 facility at Area 51 on a flying saucer craft of extraterrestrial origin that was approximately 50 feet in diameter and 20 feet high.

In Dreamland: An Autobiography (2019), Lazar wrote about his surprise over the lack of people working on the highly classified project, called Galileo, compared to similar important projects at Los Alamos National Laboratory:

I did wonder briefly why it was that what seemed to me to be a relatively small group of people were working on a project that had the kinds of implications that this one did. Los Alamos and the project to produce nuclear bombs involved an enormous number of people and resources… For all I knew, there were teams all over the country working on this same project as Barry and I. At least I wanted to believe that. I wasn’t so egotistical as to believe that I was one of only a select few working on something so monumentally important as this was. [Dreamland: An Autobiography, p. 58]

Davis and Lazar’s comments appear odd given what is known about the “deep black budget” created by the CIA in 1949 to secretly fund extraterrestrial related advanced technology projects. As I have shown in my 2004 Black Budget report, the funding available for such projects is actually massive, exceeding over a trillion dollars annually, greatly exceeding the entire Pentagon budget according to estimates spanning the years 1997-2000.

Clearly, the vast sums were going elsewhere, as Lazar suspected, rather than the reverse engineering project(s) Davis and Lazar were exposing. This raises suspicion that Lazar’s project, as well as the one Admiral Thomas Wilson had attempted to learn about (see part one), were in fact red herrings, distractions, designed to misinform UFO researchers and the general public when they learned about them.

What strengthens such a suspicion is what Davis had to say about the reverse engineering program’s termination in 1989, the same year Lazar emerged as a whistleblower. This makes it all but certain that Davis was referring to Project Galileo, the very program Lazar had been involved with at the S-4 facility.

According to Davis, the scientists were unable to sufficiently communicate to understand the new physics behind the craft due to the compartmentalization security procedures that were in place:

[1:24:00 Y.T.] I do know that the program was terminated in 1989 for a lack of progress in reverse engineering anything that they had, any of the hardware that they had, and every so often, so many years go by, and they’ll try it again. And they just don’t succeed because compartmentalization is a killer. Scientists cannot communicate with other scientists to get help.

Davis pointed out that the difficulties experienced by scientists working in the crash retrieval program are common in compartmentalized projects where scientists are prevented from sharing their problems with outside experts who normally are called upon in similar situations in the open-source world:

[ 1:25:44 Y.T.] So this isn’t just unique to the crash retrieval program. This type of problem is unique to all the black programs that the DoD has, DHS has, and the military services branches has them, the Department of Energy has their own versions…. The purpose of a black program with a special access program security rap, is you got to limit the information and exposure to the information to as few people as possible in order to produce the maximum security protection against espionage by the enemy. And so that limits who you can work with that also is cleared to know. That limits the amount of experts that you can have working with you.

And gosh, you know, if your small group of experts are stumped, you’re screwed, because you basically can’t call your buddies or somebody you know, or somebody you know of, who’s an expert better than you … a bigger expert on the subject at a university either near you or at a university across the country, you can’t call those guys. You can’t even read them in because you’re not supposed to acknowledge some of these black, most of these black programs, they’re not supposed to be acknowledged.

Not coincidentally, Lazar made the same criticism over lack of progress in Project Galileo:

The system under which we operated, how Naval Intelligence (or whatever agency truly guided these efforts) insisted upon compartmentalization and secrecy got in the way of all of us doing our jobs easily and productively. Given that there was a metallurgy group functioning somewhere on the base where Barry and I had worked, you’d think it would be an easy matter to get a company directory, dial that line (these were pre-Internet days so no email) and request the answer to our question. Because all our efforts were so segregated and knowledge not shared, that was impossible for us to do. I can cite a half dozen or more examples of how this inefficient system worked against our efforts to be productive but that one should suffice. (Dreamland: An Autobiography, p. 66).

Consequently, Davis’ statement of such programs ending back in 1989 due to a lack of success is consistent with Lazar’s revelations. In Lazar’s autobiography, he wrote about what he read about setbacks in earlier failed reverse engineering attempts in a briefing document given to him when he arrived at S-4 for his first day of work in January 1989:

Though no dates were given, it was clear to me that the project was not in its infancy. Some references were made to past attempts to understand the nature of the power and propulsion system. Several attempts had been made to reproduce the kind of system that had come into their hands, but with no success…. I next read that a previous attempt to dismantle one of the existent propulsion systems had resulted in an accidental explosion.  (Dreamland: An Autobiography, p. 44)

Ever since Lazar publicly emerged, he has revealed in multiple interviews how the reverse engineering project suffered from funding, had relatively few scientists working on it, and how scientists were handicapped from making breakthroughs due to stifling security constraints.

Lazar’s revelations align closely with what Davis revealed in his interview, and what he subsequently shared with the Congressional staffers and Pentagon officials about the failed reverse engineering project.

Once again, both Davis and Lazar’s observations appear awry with what others have claimed based on direct eyewitness testimony of reverse engineered flying saucer craft.

For example, one of Dr. Greer’s Disclosure Project witnesses, Mark McCandlish said that in 1988, the same year Lazar was recruited to work at S-4, a highly classified airshow featuring three reverse engineered flying saucers was held at Edwards Air Force Base. The three craft were sighted by a patent illustrator, Brad Sorenson, who says that the craft had been built by an unnamed major aerospace company, one that hosted one of the corporate development facilities at Edward’s Plant 42.

As professional patent illustrators, both Sorenson and McCandlish are experts in replicating the designs of advanced aerospace craft. McCandlish provided the following illustration of what Sorenson had witnessed. 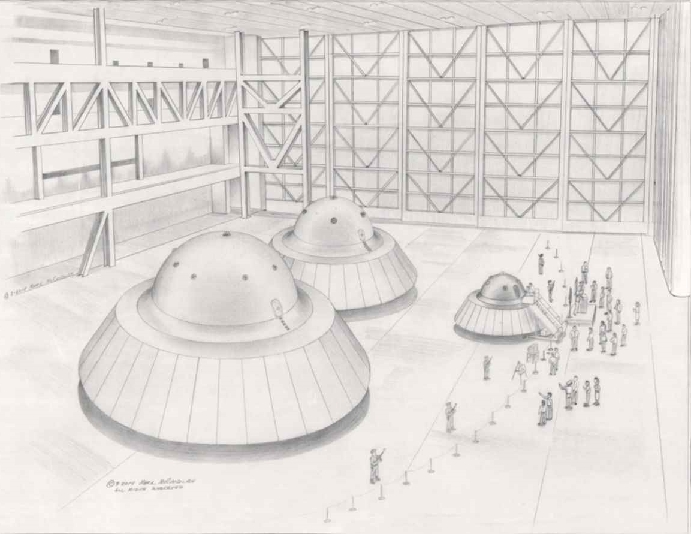 McCandlish’s testimony is consistent with the testimony of other credible witnesses, which I have discussed at length in the U.S. Air Force Secret Space Program (2019). They have spoken of the success of reverse engineering efforts concerning flying saucers and other advanced aerospace technologies going all the way back to the 1950s.

High among the list of credible witnesses is Ben Rich, the former head of Lockheed Martin’s Skunkworks, who repeatedly made references to Lockheed having the technology “to take E.T. home.” At the end of public lectures, he would famously finish with a slide showing a flying saucer and saying: “We now have the technology to take E.T. home”.

His comment always got a big laugh from his audience who were fans of the movie, E.T., but privately Rich shared with colleagues what was really going on in the classified programs that Skunkworks was involved in:

We already have the means to travel among the stars, but these technologies are locked up in black projects and it would take an act of God to ever get them out to benefit humanity…. Anything you can imagine, we already know how to do.

If one accepts the information provided by McCandlish, Rich and others that flying saucer shaped craft have been successfully reverse engineered, built and deployed, where does that leave us with the testimonies provided by Eric Davis and Bob Lazar?

It’s quite a stretch to believe Davis’ contention, which is corroborated by Lazar’s experiences, that reverse engineering efforts effectively stopped in 1989 due to setbacks, difficulties posed by the compartmentalization process, and lack of funding. The alleged lack of funding is patently absurd given the enormous “black budget” that is annually generated by the CIA and funneled into the Pentagon for unacknowledged special access programs.

Well-funded corporate aerospace facilities such as Lockheed’s Skunkworks division located at Plant 42, Edwards Air Force Base, are among the most likely candidates, especially given what McCandlish, Rich, and others have shared. More recently, testimonial evidence has emerged that the Tic Tac craft sighted by Navy pilots in 2004, were built at Plant 42 on behalf of the U.S. Air Force.

The fact that the New York Times has given prominent coverage of Davis briefing Congressional staffers and Pentagon officials, around the same time that Lazar’s testimony is gaining widespread public exposure due to a new film and autobiographical book does raise legitimate questions over whether this is all part of a limited hangout.

Davis and Lazar appear to be unwitting pawns in a sophisticated psychological operation that dates back to at least 1989, which began with Lazar. The purpose of the psyop appears to be very transparent. Deceive the public about the successful reverse engineering of flying saucer and other antigravity aerospace technologies in corporate facilities, and to sidetrack the public into focusing on government-run facilities such as S-4, which were unsuccessful in their reverse engineering efforts.

I will explore the above scenario in-depth in my upcoming August 22 Webinar, “Full Disclosure vs. Limited Hangouts“, which will also explore contemporary efforts to portray UFOs as alien threats. 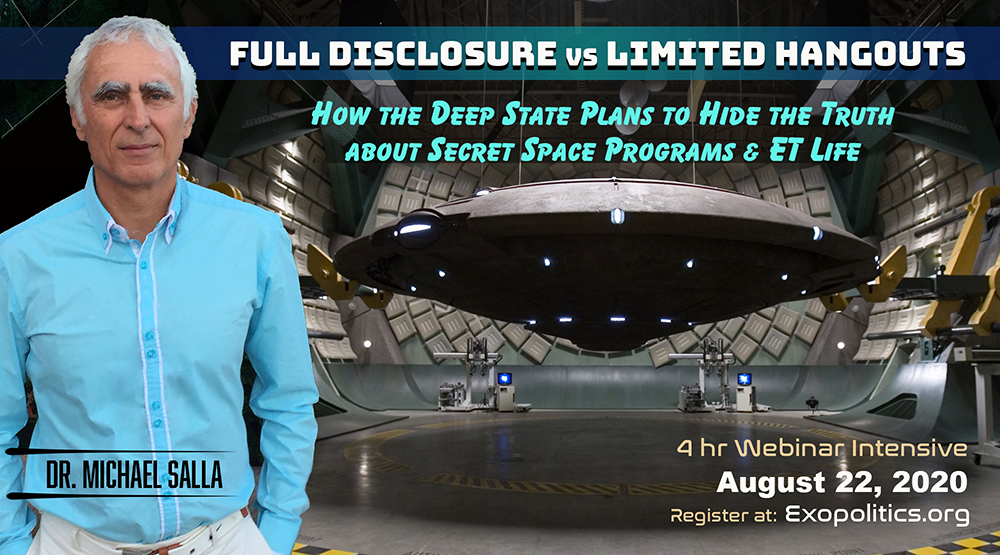 The ultimate goal is to set the stage for a false flag alien event – either an alien invasion as speculated by many in the past; or the even more intriguing possibility, given an increasing series of predicted  global disasters about to occur, of an “alien rescue”!

To be continued in Part 3. For Part 1 click here.